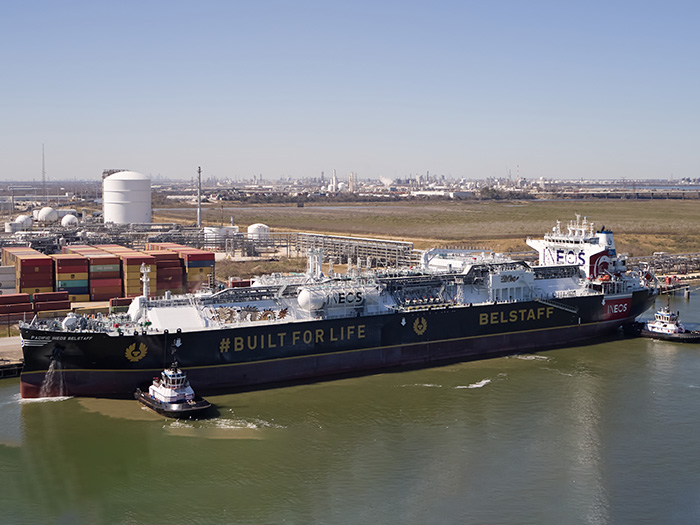 The 230-meter long ABS-classed ship is named Pacific Ineos Belstaff, after the Belstaff clothing brand, which is also owned by Ineos.

Owned by Pacific Gas (Hong Kong) Holdings Limited, the ship is the first ethane carrier fitted with IMO type B tanks, a brand-new design for transporting ethane. The tanks allow optimization of vessel capacity by fitting closely to the external shape of the vessel.

The new ship, built at China’s Jiangnan Shipyard, joins Ineos’s growing carrier fleet and was primarily built to transport U.S. ethane to both China and Europe, though it also has the potential to carry other products such as ethylene and LPG.

“As always at Ineos,” said David Thompson, CEO of Ineos Trading & Shipping, “We have innovated and invested in the future, so I am delighted that we now operate the world’s largest VLEC and I look forward to this vessel transporting vital feedstocks for years to come.”

“We are delighted to deliver the Pacific Ineos Belstaff and start serving Ineos’ ground-breaking ethane trading business around the globe,” said John Lu, President of Pacific Gas. “Today marks the beginning of a very long journey with our partner Ineos. We will maintain the highest standards for the operation of the vessel and meet the fullest satisfaction of our customers.”

The launch of the Pacific Ineos Belstaff takes the Ineos ethane fleet to eleven vessels consisting of three VLECs, and eight “dragon” ships, which have been regularly transporting ethane across the Atlantic for over five years. A fourth VLEC is set to launch this Spring.