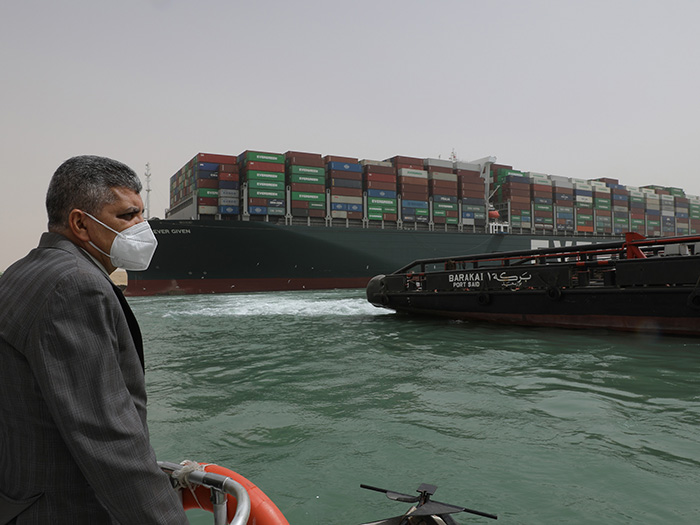 UPDATED: This morning, the Suez Canal remained blocked by the giant containership Ever Given, which remains wedged across the waterway, preventing the passage of canal traffic in both directions. The delays could be lengthy.

It could take days or even weeks to free the ship, according to Peter Berdowski, CEO of Boskalis, the parent company of Dutch salvage company Smit, which has been enlisted in the effort to free the 400 meter long vessel.

In an interview on the Nieuwsuur TV show, Berdowski said that a Smit team then on the way to Egypt would go on board the ship and collect as much technical information as possible and would also use satellite imagery.

One satellite image tweeted by Planet Labs shows how completely the channel is blocked.

Today, Admiral Osama Rabie, Chairman and Managing Director of the Suez Canal Authority (SCA) released a statement saying that that navigation through the Suez Canal is temporarily suspended “until the flotation works of the large Panamanian container vessel Ever Given; that ran aground at the 151 km area (Canal Marking), are complete.”

He said that flotation efforts included towing and pushing the grounding vessel using eight large tugboats, the largest of which, the Suez Canal Authority tug Baraka 1, has a towing power of 160 tons.

Imagery released by the SCA shows that efforts are also being made to free the ship’s bulbous bow using a mechanical digger.

The vessel is operated by Taiwan headquartered Evergreen Marine and time chartered in from Japan’s Shoei Kisen Kaisha Ltd. Evergreen said that the accident occurred at 6 nautical miles from the southern entry of the Canal as the container ship proceeded northbound through the waterway fromthe Red Sea. Gusting winds of 30 knots caused the containership to deviate from its course, suspectedly leading to the grounding.”

A statement released by Shoei Kisen Kaisha said “we are trying [refloat the ship] in cooperation with the local authorities and the ship management company Bernhard Schulte Ship Management, but the situation is extremely difficult.”

GAC’s HOT PORT NEWS is reporting thatt wo dredgrs have now been sent to assist the operation,

The Suez Canal Authority is arranging for three ships located behind the grounded vessel to exit the Canal and to wait at Suez outer anchorage, awaiting further developments.

HOT PORT NEWS says about 29 ships are reported to be waiting at Suez anchorage, and about 36 at Port Said outer anchorage.