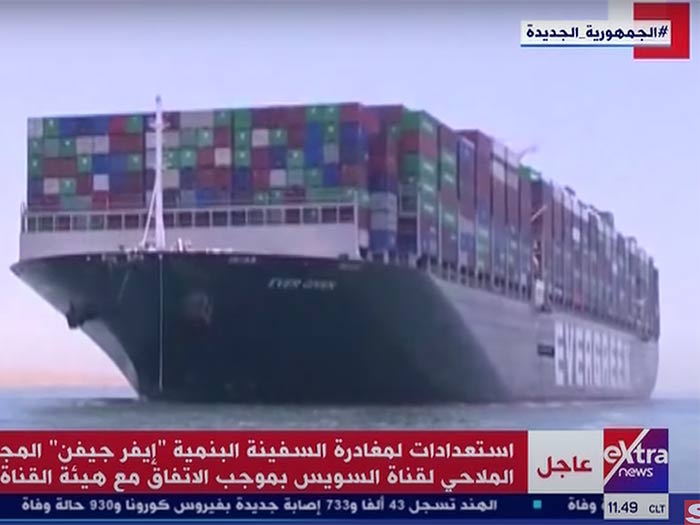 Screengrab from video shows Ever Given under way again

Arab language TV channels were this morning streaming video of the containership Ever Given under way following its release by the Suez Canal Authority (SCA). The ship was in the headlines for weeks when it became wedged across the canal in March, bringing traffic in the vital artery to a halt.

The vessel was released following a ceremony held today in the Suez town of Ismailia when settlement agreement was signed by the SCA and the vessel’s owner, Shoei Kisen Kaisha.

Bernhard Schulte Shipmanagement (BSM) as technical managers of the MV Ever Given (IMO: 9811000), confirms that following a formal agreement between the vessel’s owners and the Suez Canal Authority (SCA) the vessel and crew have departed Great Bitter Lake and are northbound through the Suez Canal.

The vessel will stop at Port Said where further precautionary hull inspections will take place. Once completed, the vessel will depart Egypt bound for the next port of call where the cargo onboard will be discharged.

“We are very pleased that the Ever Given can finally continue her voyage. BSM would like to take this opportunity to thank the master and crew for their resilience and professionalism throughout this period,” says Ian Beveridge, CEO at BSM.

The International Chamber of Shipping (ICS) welcomed the settlement.

“We are grateful for the sake of the ship’s crew that the parties have reached a successful settlement.

“You cannot put a price on the wellbeing of seafarers. The Ever Given crew is now free to continue their vital role in the global supply chain, and also travel home to their loved ones after three months of uncertainty.

“The Ever Given incident shines a light on the importance of shipping to the global supply chain and the vital role that seafarers play in supporting the $14 trillion worth of trade each year.

“The Suez incident cost $5.1 billion a day in world trade, however, this was a drop in the bucket in comparison to the financial and emotional costs that the entire industry has been having to deal with due to the draconian travel restrictions imposed on seafarers by all governments. Now that the Ever Given issue has been successfully concluded we must not forget the 1.5 million seafarers across the world.

“There are many lessons to be learned from the in-depth inquiry still underway, but we are pleased to see the Ever Given sailing again.”