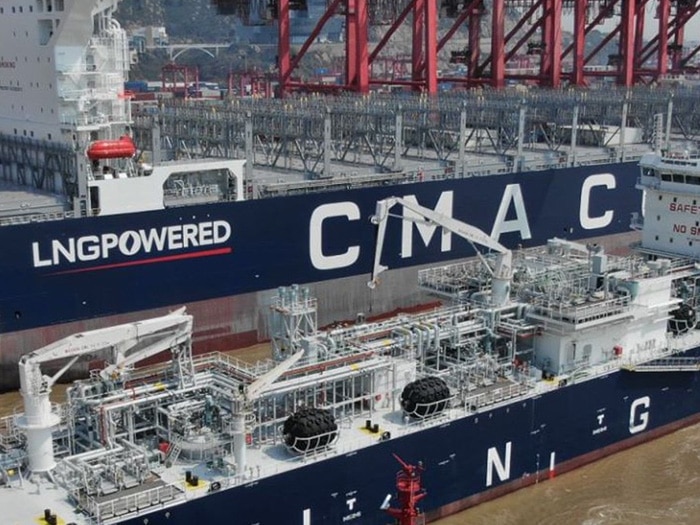 Under an agreement between CMA CGM and SIPG signed in January, starting at the end of the first quarter of 2022, and for a duration of 10 years, SIPG will provide SIMOPS LNG bunkering service for CMA CGM’s vessels sailing from China to the U.S. at Yangshan Port, the first of its kind in China.

The CMA CGM Group has been investing since 2017 in dual-fueled vessels that run on LNG, which it calls “an important first step: in reducing greenhouse gas emissions. The engines installed on these vessels are capable of operating on bio LNG and, in the coming years, will use synthetic methane (including e-methane).

The CMA CGM Group says its “e-methane ready” fleet currently consists of 26 vessels already in service and will total of 44 vessels by the end of 2024.

“With the completion of this joint project, our group has become, the first shipping line to bunker LNG in China, and the first to offer full LNG-fueled container service between China and the U.S. West Coast,: said Rodolphe Saadé, chairman and CEO of the CMA CGM Group. “By expanding the network of world-class ports offering LNG services, this bunkering marks an important step in the energy transition.”

“Today is a historic moment,” said SIPG chairman Gu Jinshan. “With the joint efforts of SIPG and CMA CGM, the first bunkering of bonded LNG for ships on international voyages in Shanghai Port was successfully completed today, which is also a first in China. It is of great significance to creating a world-class business environment, improving Shanghai’s port service functions, and enhancing the comprehensive competitiveness of Shanghai as an international shipping center.”