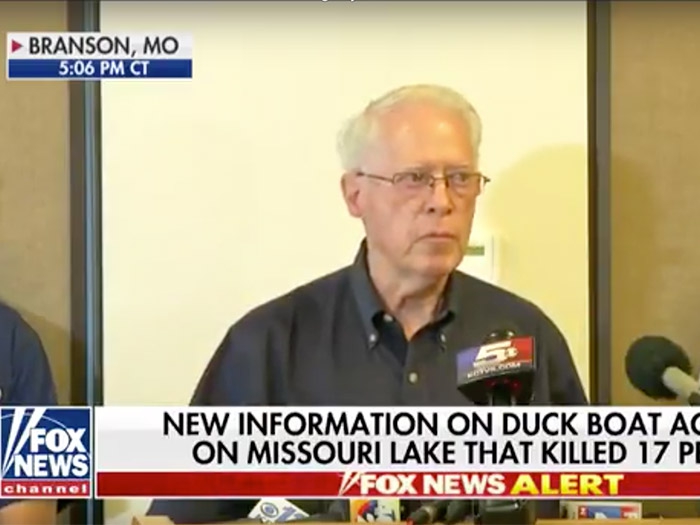 JULY 23, 2018 — The U.S. Coast Guard is today overseeing salvage operations to raise the sunken duck boat Stretch Duck 7 from the bottom of Table Rock Lake, Missourii, off of the stern of the showboat Branson Belle.

The boat, operated by Ride the Ducks Branson, sank July 19 in high wind conditions leaving 17 people dead. The salvage plan includes bringing Stretch Duck 7 to the surface, taking it to shore and transporting it to a secure facility for further inspection and investigation, where the National Transportation Safety Board (NTSB) will maintain custody of it.

As investigations continue, there are growing calls for tighter controls on the operations of the type of vessel involved or for an outright ban.

Among those calling for a ban is former NTSB chairman Jim Hall, who called duck-boat tours “essentially unregulated amusement park rides” and told USA Today: “My feeling after seeing this one is that the only thing to do in the name of public safety is to ban them.” Hall added, “I think it’s the responsible thing to do to ensure (riders) are not put at risk.”

In a briefing Saturday, NTSB Member Earl Weener said that a “black box” had been located on the submerged duck boat and had been shipped to Washington, D.C., for inspection.

A preliminary report from the U.S. Coast Guard and the NTSB is expected in about a week, said Weener, though a final determination of probable cause isn’t likely for a year.

Among other things to emerge from Weener’s press briefing was that, at the time of the fatal trip, wind readings of 73 miles per hour were recorded. Hurricane force winds begin at 74 miles per hour. Waves on the lake were estimated to be at four feet high but crested as high as six feet. Witnesses said the water washed into the boat during the ride before the boat capsized and sank.

Others calling for a ban on tourist duck boats include Philadelphia law firm Saltz, Mongeluzzi, Barrett & Bendesky, P.C., which has represented tourist-victims of duck boat fatalities on the Delaware River, and on a city street in Philadelphia.

“Incredibly there have now been more than 40 deaths since 1999 associated with these inherently unsafe, novelty tourist rides,” said trial attorney Robert J. Mongeluzzi. “After this tragedy, we again ask: What does it take for tour operators to realize that they cannot value profit more than human life and public safety? Why would those boats, which ride very low in the water on a calm day, even be operating given the severe weather conditions and posted small craft advisories? It was unconscionable.”

“Tragically, it appears that numerous recommended life-saving safety improvements were never made to the duck boats – before and after the fatal 2010 Philadelphia disaster in which two Hungarian student-passengers were killed,” said Andrew R. Duffy, Mr. Mongeluzzi’s partner and co-counsel along with Jeffrey P. Goodman in the firm’s prior wrongful death duck boat litigation. “Our engineering experts showed how the vehicles were actually engineered to fail in a water emergency, their canopies actually trapping passengers in their life jackets rather than allowing their escape. This canopy-confinement danger was known as early as 1999 and the NTSB’s direction to remove the canopies was, tragically, ignored.”

The 2010 Philadelphia case was settled collectively for $17 million just before going to a Federal court jury.