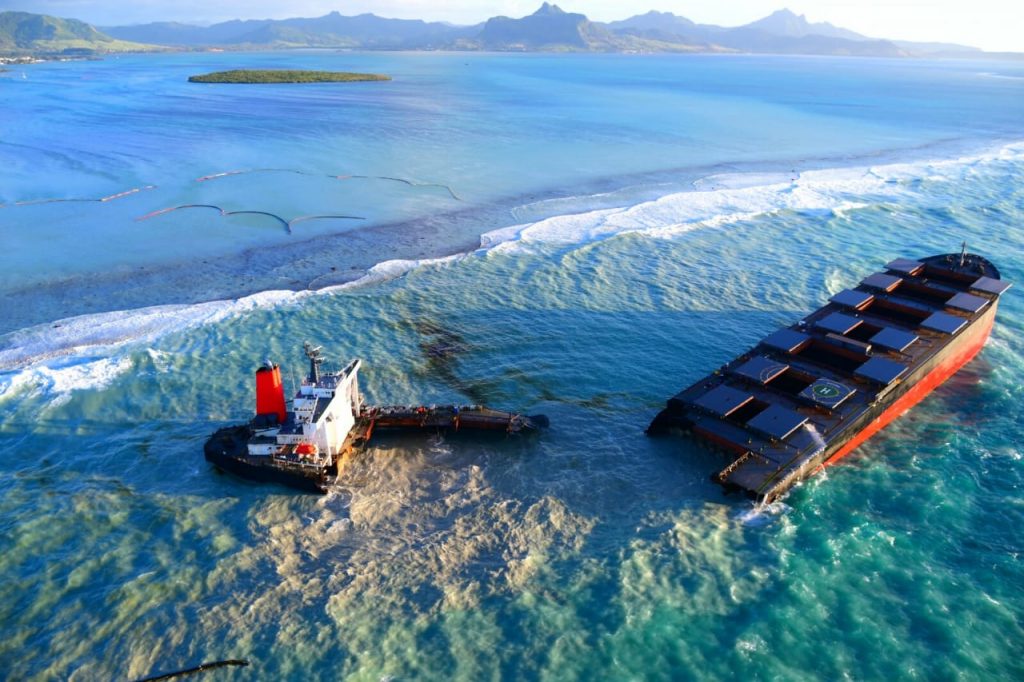 Vessel split as the result of progression of a crack in its No. 8 cargo hold, reports owner. [Image: Mobilisation Nationale Wakashio]

Imagery posted by Mobilisation Nationale Wakashio shows that the Capesize bulker Wakashio, which grounded off the east coast of Mauritius on July 25, has now split into two sections.

At around 5:00 a.m., local time, on Saturday, the salvage master warned that the vessel could break in two at any time. By 4:30 p.m., a major section of the ship’s forward section was observed to have detached.

An official press release issued at 6:00 p.m. Saturday by Mauritius’s National Crisis Committee said that a towing plan was being implemented under the supervision of the Salvage Master and the International Tanker Owners Pollution Federation Ltd (ITOPF).

“All the necessary precautions are being taken, including the positioning of National Coast Guard crafts and personnel around the vessel to respond to the actual situation,” said the release. It added that boom deployment around the vessel had been strengthened and that skimmers were on stand-by mode near the vessel to intervene as and when required.

According to the Mauritius Meteorological Services, the weather is going to worsen over the coming days with waves reaching a maximum height of 4.5 meters.

Around 814 metric tons of oil liquid waste, 318 metric tons of solid waste sludge and contaminated debris, and 250 cubic meters of saturated booms had been collected as at mid-day on August 15.

This morning, the charterer of the vessel, Mitsui O.S.K. Lines Ltd. (MOL), and the owner and manager, Nagashiki Shipping Co. Ltd., said that, except for about 1,000 metric tons that had leaked out, all bunker fuel aboard the vessel at the time of the grounding had been transferred to small tankers by August 12, and that by August 14, most of the lubricant oil and residual oil onboard (approximately 100 metric tonnes) had been collected, though amount of unrecovered oil was believed to have leaked out of the vessel.

They noted that the vessel is being continuously assessed by a team of industry experts, including naval architects, reef experts and salvors, who are closely monitoring and assessing the vessel. The professional team of salvors will focus on the safe and evironmentally sound removal of the vessel from the reef. The salvage will be carried out in compliance with regulation and in line with the local authorities’ guidance.

The ship is Panamanian registered and the Panama Maritime Authority (AMP) says that Minister of Maritime Affairs Noriel Araúz, accompanied by the AMP’s General Director for the Merchant Marine, Rafael Cigarruista, who is an engineer, will lead a delegation to Mauritius to strengthen collaboration with the authorities there.

The group will be joined by a delegation led by Japanese experts sent by the Japan Shipowners Association (JSA) with the aim of working in a coordinated way on investigations to clarify the causes that could cause the grounding and the subsequent spill.

According to the Panamanian authorities, Wakashio passed a Port State Control Inspection in Port Hedland, Western Australia, on February 14, 2020. On March 1, 2020, it passed its last flag inspection in Kawasaki, Japan.

“Both inspections yielded positive results, so that the ship, both in its structure and its equipment, complied with the International Conventions established by the International Maritime Organization (IMO),” notes the AMP.

At the time of the accident, the ship was carrying 20 crew members of different nationalities, all with the required certificates for their respective positions and responsibilities on board, as required by the STCW convention.