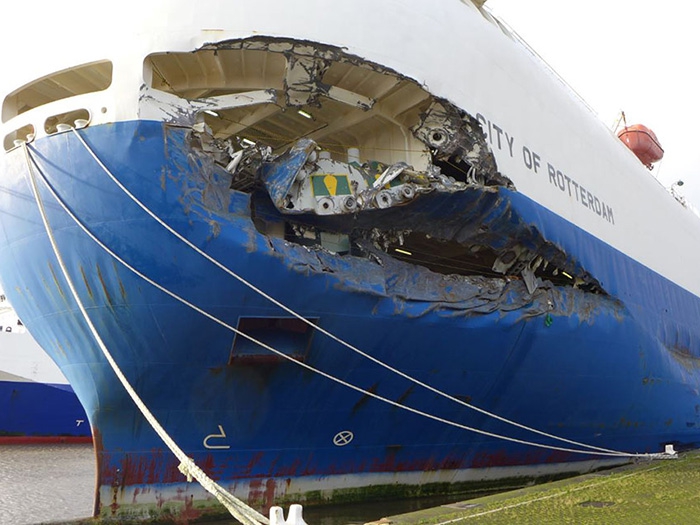 Damage sustained by City of Rotterdam

NOVEMBER 10, 2017 — The U.K.Maritime and Coastguard agency reports that a former captain and marine pilot have each been given four months suspended sentences after pleading guilty to offenses in connection with the December 3, 2015 collision between the Panama registered pure car carrier City of Rotterdam and the Danish registered RO/RO ferry Primula Seaways on the River Humber.

Both vessels were damaged but made their way to Immingham without assistance. There was no pollution and there were no serious injuries.

Interestingly, the U.K. Marine Accident Investigation Branch report on the collision identified that the “outbound City of Rotterdam had been set to the northern side of the navigable channel and into the path of the inbound ferry, but this had not been corrected because the pilot on board had become disoriented after looking through an off-axis window on the semi-circular shaped bridge.

“The car carrier was of an unconventional design and his disorientation was due to ‘relative motion illusion,’ which caused the pilot to think that the vessel was traveling in the direction in which he was looking. Consequently, the pilot’s actions, which were designed to maneuver the car carrier towards the south side of the channel, were ineffective.”

According the Maritime and Coastguard Agency report on the case

At 7.00 pm on December 3 2015, Mr Sirimanne, who was then working as a marine pilot for Associated British Ports boarded the car carrier City of Rotterdam at Immingham Dock.

He was due to navigate the Panama-registered car carrier along the River Humber to the mouth of the river where full control was then to be handed over to the captain Ruslan Urumov to take the vessel to sea.

“Storm Desmond” had been forecast earlier in the day and strong winds were likely to affect that area bringing its own hazards to navigation that evening.

Humber Vessel Tracking Service (VTS) monitored the City of Rotterdam track which showed that she was straying into the north side of the shipping channel and into the Hawke Anchorage.

Although no injuries were reported, both vessels sustained major damage.

In passing sentence Judge HHJ Richardson said this represented the destruction of their professional reputation as professional mariners which had been eradicated by this criminal act.

Michael Groark, surveyor in charge for the Maritime & Coastguard’s Hull office said: “this shows that the rules are there for a reason. It was a serious collision which could have resulted in serious injury. Both of these men ignored several alerts warning them they were on the wrong track and put not only themselves but others using the channel correctly, at risk.”

The MAIB report on the case makes instructive reading. Get it HERE