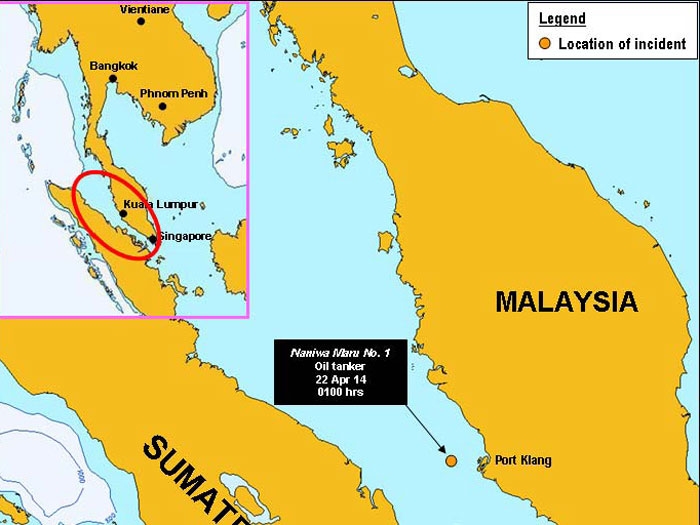 According to a report by the ReCAAP ISC (Regional Cooperation Agreement on Combating Piracy and Armed Robbery against Ships in Asia Information Sharing Center), on April 21 at about 6.20 a.m. local time the ship departed Singapore for the port of Yangon, Myanmar with 4,344 metric tonnes of Marine Diesel Oil onboard.

On April 22, the shipping company, based in Singapore, reported to the ReCAAP ISC that two vessels had come alongside the vessel near Port Klang, Malaysia (02°
59.00′ N, 100° 54.90′ E) at about 1.00 a.m that day. The ReCAAP ISC immediately alerted the Malaysian Maritime Enforcement Agency (MMEA).

At the time of the incident, there were 18 crew comprising Indonesians, Indians and Thai nationals onboard the tanker.

Subsequently, the shipping company updated the ReCAAP ISC that had five robbers appeared on the bridge and held the crew while they siphoned about 2,500 metric tonnes of Marine Diesel Oil and escaped.

The company also reported that the master, chief officer and chief engineer (all Indonesians) were taken by the robbers, together with their personal belongings and travel documents.

The rest of the crew was left onboard without any injury. The shipping company reported that one of the two vessels that came alongside MT Naniwa Maru No. 1 flew a Mongolian flag and had a black and white hull and shelter at the poop deck. The MMEA boarded MT Naniwa Maru No. 1 and is working closely with the Indonesian Marine Police and authorities to establish where the two vessels were heading towards; and to locate the three missing crew. Investigation is ongoing.

The ReCAAP ISC considers this incident as a case of sea robbery involving siphoning of Marine Diesel Oil pending further investigation, and coordination with other agencies to locate the three missing crew.