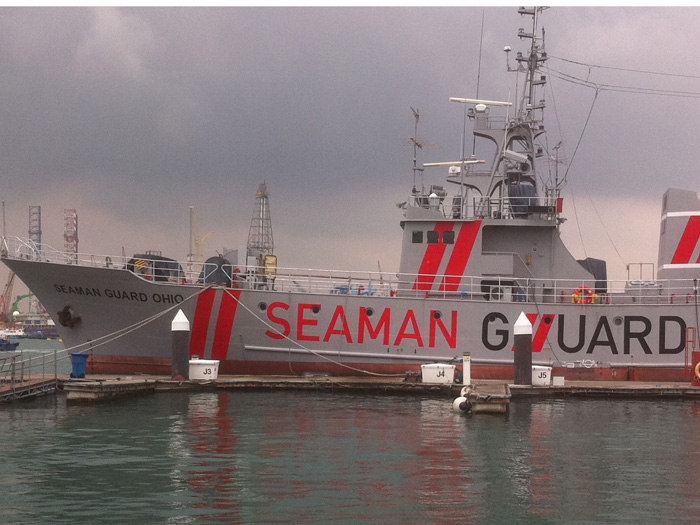 OCTOBER 13, 2014 — Although, back in July, the Madras High Court yesterday quashed the criminal case against all 35 crew members and security guards of the Seaman Guard Ohio (see earlier story), the London headquartered Mission to Seafarers said yesterday that the freed crew of the MV Seaman Guard Ohio now face further detention and a possible re-trial after a last minute appeal was lodged to overturn the High Court decision.

Yesterday marked the one year anniversary of the seizure of the vessel after straying into Indian waters during a typhoon. Until its detention, the Seaman Guard Ohio was used by U.S.-based maritime security firm AdvanFort International as an accommodation platform for counter-piracy guards between transits on commercial vessels transiting the High Risk Area in the Indian Ocean.

The Revd Canon Ken Peters, Director of Justice and Welfare, The Mission to Seafarers, said yesterday: “This has been the most terrible ordeal for all the crew and their families, and I am baffled that this has happened now. It has been a complex case, but the High Court Judge dismissed all charges three months ago, so the men rightly presumed that they were at last free to go. I have been working with the Foreign and Commonwealth Office (FCO) to try and assist with the repatriation of the men. However, it now transpires that the Security Forces, known as ‘Q Branch’, have lodged a counter-appeal to have the charges re-instated in the Indian Supreme Court. This is really making the lives of all concerned a misery. As the men have now been held for a year, I would like to make a further appeal to the good sense and sound judgment of the Indian Government to please look again at this case, and assist in this matter, to allow the seafarers to return home to their families as soon as possible.”

John Armstrong, one of the crew speaking from India yesterday, said: “Since the charges were dropped we were entitled to return home. Nothing in Indian law states that we can have our documents withheld by the authorities when we have been found innocent. Despite this, the magistrate court in Tuticorin overturned the High Court’s dismissal of the case and ruled we were not allowed our travel documents or luggage, which is apparently still on the ship. Now we face a further counter-appeal and retrial at the eleventh hour instigated by the Indian Security Forces. We have no idea why. Despite this injustice, our government will not get involved in the legal process.”

Paul Towers, talking last night from India, said: “If we have to go to another trial, we will be represented and we will have to fight again to clear our names; we have already been found innocent of all charges in July, and have been held in India for a year; we haven’t been paid for 11 months and this has had a heavy financial effect on all of our families. I pray to God this will end soon.”

Billy Irving, another crew member, writing from India last night, said: “I feel let down by the FCO as they have not done all they can to help us six U.K. Nationals being held in India. The FCO said to me that they would not help us, even if we are seriously ill and cannot afford any medical treatment. I feel disgusted when I read a statement in an reply email to my father, from the British High Commissioner here in India, Mr. Bharat Joshi, who said, ‘It is not appropriate for the UK taxpayer to bear the cost of accommodation, medical or other associated living expenses for the men.’

“I have been a tax-payer since leaving school, I have served in Her Majesty’s Armed Forces for over nine years, I still paid tax when I was deployed on combat operations, and to read that statement from a British High Commissioner is sickening; I feel truly let down. I have complained about how the FCO has dealt with problems I have had and yet I have had no reply.

“I have been away from home for 16 months now and I can not wait for this nightmare to end. This has affected me and my family mentally, physically and financially. I need to get home ASAP as I have a baby on the way and other issues that need sorting. Most importantly I need to get home and get back to work so I can pay off debts and be able to support my baby. I would like to thank my family and friends for all their support. It truly has helped me cope with what is happening to us over here.”

Ann Towers, wife of Paul Towers, said: “We cannot as a family believe that a hard working honest man, who has given thirty years loyal service to our Queen and this country, could be imprisoned for nine months, and then even when all charges had been quashed continue to be held captive in India. We urge the Indian Authorities to show some compassion to our men, and allow them to come home to their families. This has been the worst year of our lives with no sign of a conclusion. These men were carrying out an important role working for a legitimate Maritime Security Company in protecting ships, crew and cargo from pirates and terrorists.

“Words cannot express how devastated we are at Paul’s situation; we are humbled by the unwavering support from close family, wonderful friends, work colleagues and The Mission to Seafarers. We urge the British Government to take a more robust stance at the injustice of the situation and facilitate the men’s return home. They have all fought for this country, now it is the Government’s duty and responsibility to fight for our men.”

Lisa Dunn, sister of Nick Dunn, said: “Nick and our family are extremely frustrated, angry and upset at the time taken to resolve this situation. Every second the men remain in India is a second too long, especially when they were proved innocent of any wrong-doing in July. We feel very let down that the British Government says they cannot get involved in legal proceedings. These men are free men now and yet are being prevented from leaving the country by the Indian authorities. We ask the British Government, how is that legal?”