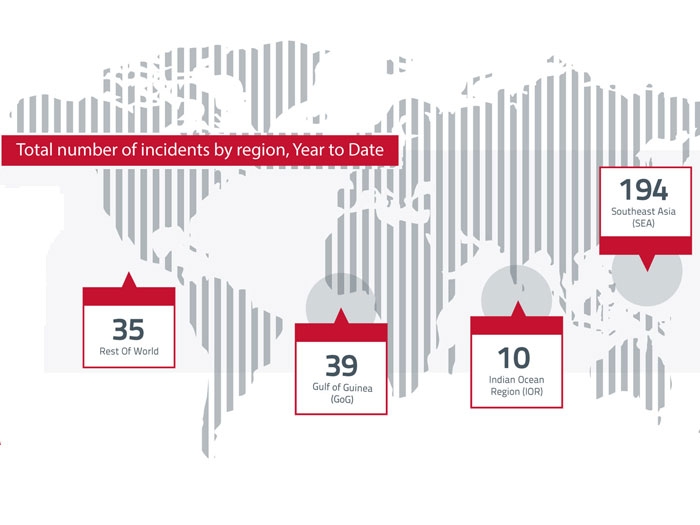 Ian Millen, Dryad Maritime's Chief Operating Officer, says:"In Southeast Asia, the final quarter of the last three years has seen the highest numbers of incidents per quarter and we see no reason why this will not remain the same this year; a year in which we've already seen the highest number of incidents in the first nine months. There is a pressing need for a joined-up security effort in the Singapore Strait and other areas. Without a high visual presence from security agencies, criminal gangs will continue to operate freely with little fear of capture or prosecution."

Mike Edey, Dryad Maritime's Head of Operations, says:"By complete contrast, the worrying figures in Southeast Asia come at a time when the combined efforts of the shipping industry, naval forces, armed guards and others have resulted in the first geographical reduction of the Indian Ocean High Risk Area (HRA). This is a testament to those who have taken a multi-faceted approach to containing the threat of Somali piracy and the first sign of a long-awaited period of de-escalation in the region. This will bring significant relief to the shipping industry who can, in some cases, transition to more cost-effective and dynamic methods of risk mitigation."

OCTOBER 20, 2015 — In its third quarter analysis of trends in global maritime crime, U.K maritime intelligence specialist Dryad Maritime notes a rise of 38% in incidents across Southeast Asia, in comparison to the same period last year.