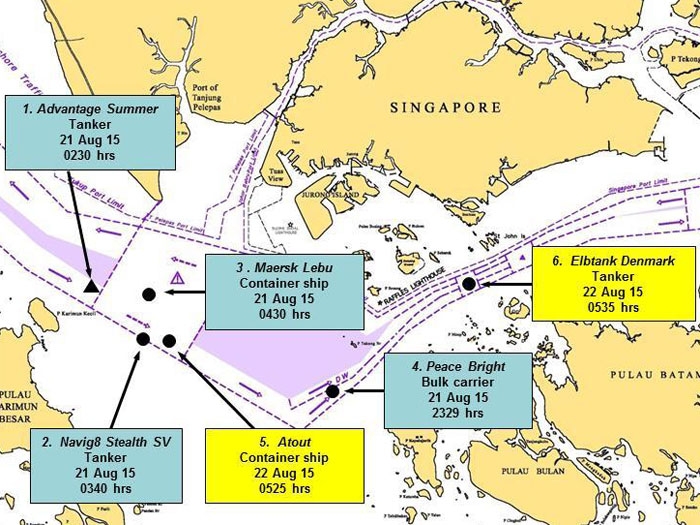 AUGUST 24, 2015 — A Maersk containership and a Navig8 tanker were among six vessels involved in a string of piracy incidents August 21 and 22.

According to the Singapore based ReCAAP Information Sharing Center, all six were underway in the eastbound lane of the Traffic Separation Scheme (TSS) in the Straits of Malacca and Singapore when they reported the incidents —five unauthorized boardings and one attempted one — to the Singapore Vessel Traffic Information System (VTIS).

In sequence, here’s what happened”

At about 0230 hrs, the 156,527 dwt tanker Advantage Summer was underway when five perpetrators attempted to board the vessel at the stern from a speedboat. The crew was alerted, the perpetrators aborted the attempt and fled. The master reported incident to the VTIS via VHF.

Slightly more than an hour later, at about 0340 hrs, Navig8 Stealth SV was underway when four perpetrators armed with knives were sighted in the engine room. The master raised the alarm and the perpetrators fled. There was no loss of property and the crew was safe.

Less than one hour after that, at about 0430 hrs, Maersk Lebu was underway when four perpetrators were again sighted in the engine room. The master raised the alarm and the perpetrators escaped in a waiting small boat. There was no loss of property and the crew was safe.

At about 2329 hrs, the 76,000 dwt Panama flagged bulker Peace Bright was underway when four perpetrators were sighted onboard the vessel. The alarm was raised and the perpetrators escaped in a waiting boat. There was no loss of property and the crew was safe.

At about 0525 hrs, the Liberian flagged containership Atout was underway when the crew sighted four perpetrators without weapons onboard the vessel. The alarm was raised and they escaped. There was no loss of property and the crew was safe.

About an hour later, the 37,383 dwt chemical/products tanker Elbtank Denmark was underway when the crew sighted four perpetrators armed with knives onboard the vessel. The perpetrators stole the crew’s personal effects and escaped in a small boat. The crew was safe.

“Considering the close interval of time and proximity of these incidents, the perpetrators could possibly be from the same group,” the ReCAAP ISC says. “From the description of the incidents, the perpetrators operated in about 4-5 persons, armed with knives and were opportunistic in nature without targeting specific vessels. They aborted boarding when crew was alerted, and escaped empty-handed when the alarm was raised without harming the crew. Of concern was their persistence in ‘hovering’ in the vicinity seeking out their next target.”

The ReCAAP ISC says it commends the masters of the six vessels for reporting to the Singapore VTIS who issued the navigational broadcast to mariners, and notified the enforcement agencies.The ReCAAP ISC strongly recommends all vessels operating in this area to exercise enhanced vigilance and take extra precautionary measures while underway.