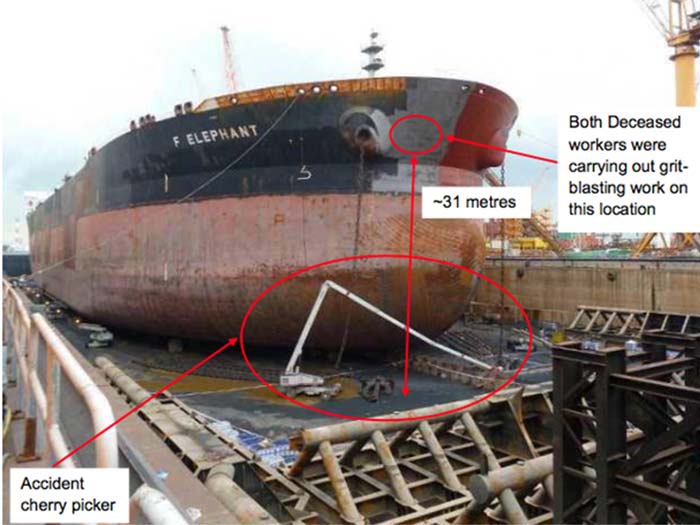 The workers were employed by Shipblast Marine, which had been engaged by Jurong Shipyard to carry out grit blasting work to smoothen the surface of a vessel in a dry dock.

The workers were in a cherry picker’s basket when the boom of the cherry picker buckled and collapsed, causing the basket to fall about 30 m down to the dry dock.

Media reports cite a statement by Singapore’s Ministry of Manpower (MOM) as saying that all four boom sections and the basket of the cherry picker were corroded.

The cherry picker underwent an 18-month overhaul that was completed in July 2011. However, the second boom section had sustained significant wear and tear, with the remaining boom plate thickness measured as low as 2.86 mm (the original thickness of the boom plate was reported to be 6.00 mm).

According to the manufacturer’s guidelines, it should have been replaced. But Jurong Shipyard, which is owned by Sembcorp Marine, only blasted and painted over the affected areas.

According the Ministry of Manpower, the shipyard did not refer to the manufacturer’s inspection guidelines prior to the incident. Instead, it erroneously referred to classification society rules for survey after construction, that are intended for conventional vessels and not for lifting equipment.

After the overhaul, Jurong Shipyard failed to do comprehensive checks of the boom.

Jurong Shipyard was fined under the Workplace Safety and Health Act (WSH Act) for failing to ensure the cherry picker was maintained in a safe condition.

“Two workers lost their lives as a result of poor equipment maintenance,” said Chan Yew Kwong, MOM’s Director of Occupational Safety and Health Inspectorate. “The MOM will prosecute owners of equipment who fail to provide for its safe use, putting workers’ lives at risk.”

Last November, Jurong Shipyard was fined S$400,000 (about US$301,000) under the WSH Act for failing to take reasonable measures necessary to ensure the safety and health of employees employed by contractors of the Noble Regina Allen (NRA), an oil rig under construction.