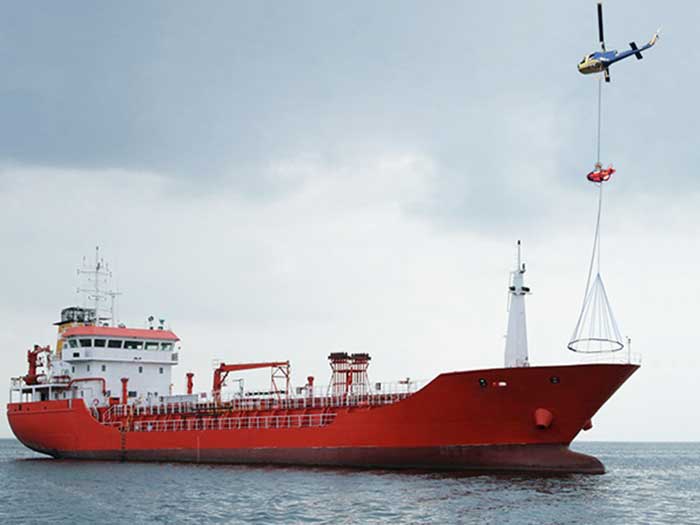 The system has been developed to give nations the ability to protect their coastlines from the danger of ships that have lost engine power and from the pollution that can result when they run aground.

The ShipArrestor system uses a specially designed parachute-shaped sea anchor that is connected to a drifting ship by helicopter and secured without any need for crew involvement.

The helicopter then deploys the sea anchor which dramatically reduces the rate at which the ship is drifting and makes it more stable for salvage and for rescue teams to board when they eventually arrive.

The latest design changes now enable the sea anchor to become effective more quickly, shaving minutes off the time the ship is drifting out of control.

“Thirty years ago the ShipArrestor would have been impossible to make as advanced materials combining strength with lightness are essential for its manufacture,” said Nicolai Michelsen, general manager of Miko Marine. “It is only because the special fabrics and metals used are now available that the project was able to go ahead. Working closely with the NCA, we have continued to develop the design to improve its performance and efficiency and the Mark 2 version is another landmark in its evolution. We are very pleased to be equipping the NCA with a system with which we all have even greater confidence.”

The upgraded version of ShipArrestor incorporates a number of design changes and modifications that will make it easier for the tow line to be picked-up by the tug. The principal improvement involves a three-step release mechanism that gives the helicopter pilot greater control over the system’s deployment and enables the sea anchor to take effect more rapidly.

With the new version, the pilot lassoes the ship’s foredeck winches and bollards with a ring of specially developed lightweight chain as before. The chain is connected to a high strength tow line which is paid-out as the helicopter flies upwind a short distance where the pilot presses the new three-step ShipArrestor control button. This disconnects the chain and the first part of the tow-line from the helicopter. After then flying about another 40 m, the button is pressed again allowing the parachute sea anchor bag to drop into the sea and to begin opening. The final step is to continue flying upwind, helping the main anchor to unfurl in the process, before pressing the button for a third time. This releases a 30-metre continuation of the tow-line that terminates with a high visibility buoy and a smaller pilot anchor that serves to keep the tow-line straight.

The Miko development team has been advised that the agility of modern tugs makes a long pick-up line unnecessary and that the tug crew can recover and make fast the shorter tow line more quickly.

When it is fully deployed, the ShipArrestor will immediately reduce the severe rolling that has been responsible for tankers such as the Prestige and the Erica breaking-up due to the stresses of lying side-on to the waves.

Once the rescue tug arrives it can lift the buoy on board and use the tow line to lead the ship to safety. Due to the advanced, high-strength materials used by the ShipArrestor, any size of ship from a trawler to a supertanker can be quickly turned into the wind and its speed of drift halved. Because drifting ships can travel surprisingly quickly in strong winds, every minute can be vital. By modifying the ShipArrestor so it becomes active more quickly, Miko Marine has shaved vital minutes off its deployment time.

Miko Marine of Oslo, Norway, led a consortium of eight European organisations in the development of the ShipArrestor. Partly funded by the European Union, this included companies from France, Germany, Netherlands and Austria as well as the Norwegian Institute of Technology and the U.K.’s Ship Stability Research Centre which all applied their individual expertise to the challenge. Coppins Sea Anchors Ltd of Motueka, New Zealand also joined the team as co-developers of the ShipArrestor, bringing decades of experience in the development of large sea-anchors to the project.

Ola Jordheim, NCA chief engineer and ShipArrestor project manager said: “We hope that we will never need to use our ShipArrestor systems, but our experience suggests otherwise.”