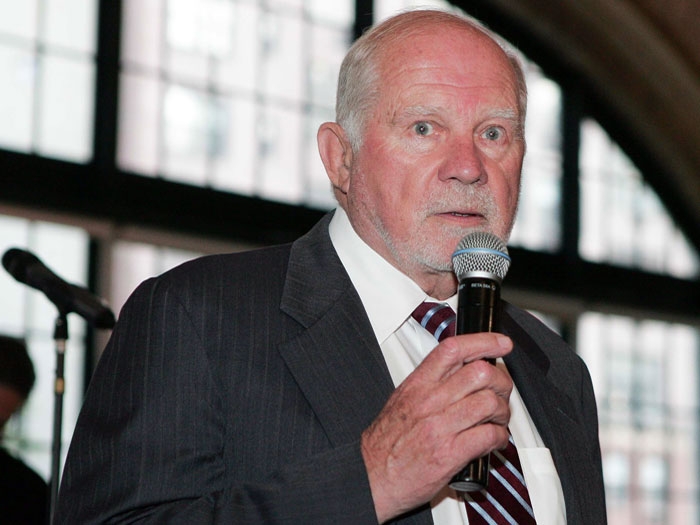 JUNE 24, 2016—On the cusp of celebrating its centennial in 2017, P&I insurer The American Club continues to prosper, reporting positive results for 2015 despite a challenging market at its annual meeting for members held in New York last night.

The Club’s Chairman, J. Arnold Witte, President of Donjon Marine Co., Inc., highlighted The American Club’s strong performance during remarks to members at dinner. “For most of the shipping industry, 2015 was not a good year,” said Witte. “Nevertheless, the American Club made progress in many areas. This has been sustained into 2016.”

Witte added: “Next year the American Club celebrates its centennial. It is to be hoped that economic conditions generally, and those affecting the shipping industry in particular, will have improved by that time. But whatever the future holds, your Board remains committed to an exceptional level of solidarity with its members, and dedicated to maintain those unsurpassed levels of service upon which its reputation has been built during its first hundred years.”

The Club’s tonnage and revenue experienced some attenuation in 2015 as global trade slowed and freight markets continued to struggle. Following the 2016 renewal, year-on-year tonnage entered for P&I and FD&D risks was stable at about 14 million GT for the former and 9 million GT for the latter class of business, but the Club’s charterers’ entry had showed encouraging growth.

Elevated levels of vessel turnover over the previous twelve months had caused an erosion of the Club’s dry bulk constituency (which, for 2016, has fallen from 44% to 40% of the total) but tanker tonnage had grown by a commensurate margin (rising from 40% to 44%). Premium rating, however, had remained comparatively firm, despite the enduring effect of “churn” as older, higher-rated vessels continued to be replaced by younger, lower-rated ships.

Claims for the Club’s own account proved to be exceptionally benign during 2015. Indeed, at the fifteenth month (as at May 20, 2016) of development, retained claims for the 2015 policy year were $29.5 million, 44% lower than those of 2014 at the same stage. International Group Pool claims were also exhibiting a modest level of development both for 2015 and its two predecessor years.

The risk profile of the American Club’s membership had further improved over the 2016 renewal. Entries at the outset of the current policy period had a trailing five-year gross loss ratio of only 52%. This indicator had been on a favorable trajectory for several years, and augured well for the future.

Net premiums earned during the 2015 financial year were about 14% lower than the figure for the previous period. Total income, at $87.6 million, was also down by comparison with 2014, an increase in net interest and dividend income being offset by a year-on-year reduction in net realized capital gains.

However, incurred losses for the 2015 financial year, at $49.4 million, were more than 25% lower than the figure recorded for the previous twelve months, while operating expenses were also down, in this case by about 2.5%.

While the Club’s net income for the 2015 financial year increased from $1.2 million to $3.6 million, this was offset by an unrealized loss on investments of $5.8 million producing a small after-tax deficit for the year of $2.2 million compared with a surplus of $1.3 million twelve months earlier. Accordingly, members’ equity had reduced from $58.6 million to $56.4 million as of December 31, 2015.

The Club’s statutory surplus at year-end 2015 was, however, substantially greater than that recorded twelve months earlier, rising by 15% from $64.8 million in 2014 to $74.3 million for 2015. Some of this was attributable to the issue of a surplus note of $19.5 million toward the end of 2015, part of which had been committed to the Club’s investment in the hull market in the form of American Hellenic Hull Insurance Company, Ltd.

As to the development of policy years, 2013 was being closed as originally budgeted. The deficit for the year of $6 million would be subvented by the Club’s contingency fund which stood at $72.5 million as of March 31, 2016. In addition, the release call margin for 2015, as foreshadowed in the Club’s Circular of November 2015, was being reduced from 20% to 15%, in light of the continuingly benign claims development on that year.

The American Hellenic Hull initiative, which had commenced in the early part of 2015, continued to gain momentum. Many benefits had already accrued to the American Club, and more would follow. The transaction would enable the Club to become involved in the hull sector in a cost-effective manner, which exploited existing corporate structures and market platforms. This combination of capabilities was creating a new force of growing energy within the marine insurance industry worldwide.

Eagle Ocean Marine (EOM), the American Club’s fixed premium facility, which focuses on the operators of smaller vessels in local and regional trades, was also performing well, and had made a strong contribution to overall results. EOM had continued to expand its market footprint during 2015, particularly in Asia. Its combined ratio remained less than 70%, testimony to its prudent approach to risk selection.

On the service front, in addition to the energetic promotion of loss prevention and other risk management tools, the Club was opening an office in Houston. This was scheduled for early July 2016. The office would enhance the Club’s claims handling and related services throughout the Gulf of Mexico, contiguous regions of the United States, and in Central and South America.

In recognition of its superior standards of member service, the American Club had in May 2016 won the Lloyd’s List 2016 North American Maritime Services Award. This spoke to the high regard in which the Club was held by the maritime community and represented a fitting tribute to all its members on the eve of the Club’s centennial year.

Joe Hughes, Chairman and CEO of the American Club’s managers (shown at right), Shipowners Claims Bureau, Inc., added: “Global trade faltered in 2015, exacerbating the economic hardships which have weighed upon the shipping industry in recent years. While this gave rise to an unpromising environment in which to advance the business of the American Club, it nonetheless made good progress during the year. A particular highlight was the development of the American Hellenic Hull initiative which holds great promise for the future.”

Hughes continued: “It was especially gratifying to win the Lloyd’s List 2016 North American Maritime Services Award, the Club having, in the opinion of the judges, “gone above and beyond best practice to offer the shipping industry something exceptional.” The award celebrates the great progress the Club has made in recent years. On the eve of its centennial, the American Club looks forward with both confidence and excitement to a second century of service to the global maritime community.”