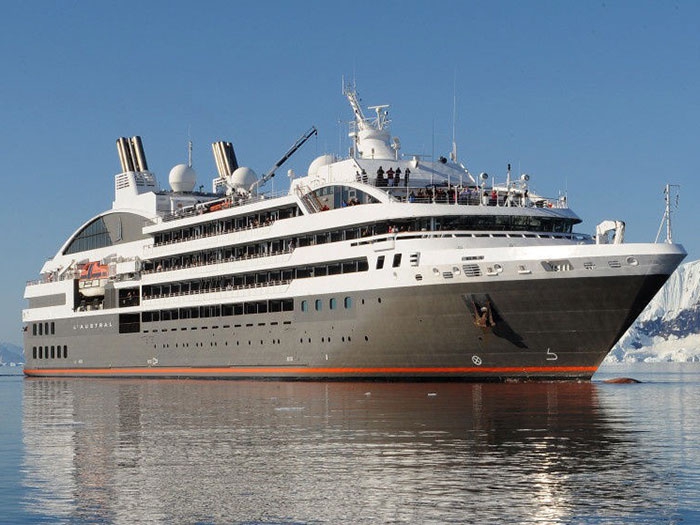 OCTOBER 3, 2018 — A New Zealand court has imposed fines on French cruise line Compagnie du Ponant and the master of its 264 passenger expedition cruise ship L’Austral following the January 9 grounding of the ship in the remote New Zealand Subantarctic islands.

Wellington District Court yesterday fined the company NZ $70,000 (about US $46,000) and Captain Regis Daumesnil NZ $30,000 (about US $20,000). They had pleaded guilty to charges following the grounding of the cruise ship on an uncharted rock at the Snares Islands.

Both Maritime NZ and the New Zealand Department of Conservation (DOC) brought charges against Captain Daumesnil, with DOC also prosecuting the company.

Charges were filed against Captain Daumesnil under the Maritime Transport Act 1994 for causing unnecessary danger or risk to the people on board, and against both Captain Daumesnil and the company under the Resource Management Act 1991 for entering a 300 meter exclusion zone around the Islands.

The Summaries of Fact stated L’Austral had inadequate “passage plans” and failed to monitor the ship’s position near hazards to navigation. As a result of the grounding the vessel’s hull was punctured in three places. Rather than return to Bluff, the nearest port, Captain Daumesnil made the decision to continue on the cruise schedule to the Auckland Islands, a further 285 km south.

There were 356 passengers and crew onboard.

DOC Southern South Island Operations Director, Aaron Fleming, says it was “pure good luck we did not have a potential environmental disaster” resulting from the incident.

“The Snares Islands are one of the jewels of our conservation estate and protected as a UNESCO World Heritage site,” he said. “DOC expects all visitors to respect and comply with the regulations which are in place to protect and preserve this pristine environment. They are a unique, unspoiled, but extremely sensitive site that is free of pollution and introduced pests and predators.”

Maritime NZ Southern Regional Compliance Manager, Mike Vredenburg, said the case could have ended in tragedy and was a graphic warning of why passage planning is mandatory in New Zealand and internationally.

According to Vredenburg, Captain Daumesnil had an inadequate plan for sailing around North East Island, no plan at all for drifting close to shore while recovering boats, did not identify areas of danger, and did not monitor that the ship remained in safe water.

“His ship grounded, was holed and everyone on board was endangered. Captain Daumesnil then made the situation worse by sailing further away, from any possible help, should it have been needed.”

Maritime NZ released the followng summary of the incident

L’Austral had arrived at the Snares Islands on January 9, 2017. That morning passengers were unloaded into small inflatable boats for permitted excursions off the east coast of North-East Island.

At 12.45 pm the passengers came back onboard and L’Austral then sailed to South Bay to decide if more excursions could be made that afternoon.

On reaching South Bay it was decided no further passenger excursions would take place due to deteriorating weather.

Recovery of the inflatable boats began and Captain Daumesnil allowed the vessel to drift under manual control, entering the exclusion zone, coming at its closest to 162 meters from the shore.

At about 3.08 pm the stern of L’Austral grounded on an uncharted rock 220 meters from shore. Review of the vessel’s paper chart, electronic chart display and GPS positions show that at the time of the grounding the vessel was being navigated without following any passage plan.

Immediately after the grounding alarms sounded, indicating water had entered the hull. Captain Daumesnil directed the area that had been holed to be isolated and checks made around it.

It was confirmed no water had entered the oil sludge tank, fuel tanks, engine room or other spaces around the part of the hull that had been damaged.

Captain Daumesnil then decided to sail 154 nautical miles (285 km) further south to Enderby Island to continue the cruise as scheduled. He reported the incident to French, but not New Zealand, authorities.

The nearest port to the Snares Islands is Bluff, 120 nautical miles (220 km) north, which itself is a considerable distance over ocean should a search and rescue operation have been needed.

L’Austral continued its cruise and returned to Bluff on January 12. Divers were contracted to inspect the damage and temporary repairs were carried out.

On January 13, Maritime NZ Maritime Officers carried out a regular Port State Control inspection of the ship. They became aware of the grounding, an investigation began and when it was discovered L’Austral had also entered an environmental exclusion zone DOC was advised and joined the investigation.