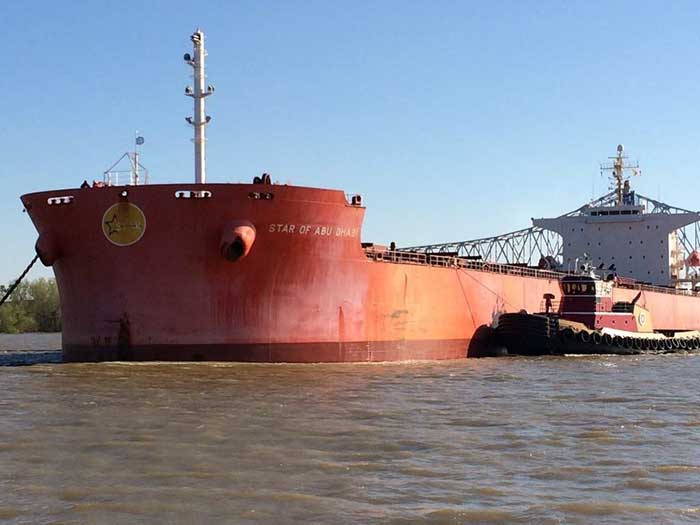 Star of Abu Dhabi after the accident, with missing port anchor

APRIL 26, 2017 — The National Transport Marine Safety Board has issued a Marine Accident Brief on the March 26 allision of a 739 ft Panama-flagged bulk carrier with the Louisiana Sugar Refinery near Gramercy, LA

The barebones NTSB Executive Summary of the accident brief says:

​In the early morning on March 25, 2016, the bulk carrier Star of Abu Dhabi was anchored using two anchors in the Lower Grandview Anchorage, mile marker 146.2, on the Lower Mississippi River near Gramercy, Louisiana. About 0230, the vessel’s port anchor chain parted and the starboard anchor began to drag. As the Star of Abu Dhabi moved with the current, it allided with the Louisiana Sugar Refinery (LSR) raw sugar unloading dock, located at mile marker 146.1, and continued to drift downstream. The vessel’s propulsion engine was started, allowing the crew to bring the vessel under control about 0.1 mile from the Veterans Memorial Bridge (also known as the Gramercy Bridge). The vessel sustained $232,210 in damages to its hull above the waterline. The dock sustained $4.6 million in damages. There were no injuries or pollution.

​The National Transportation Safety Board determines that the probable cause of the allision of the Star of Abu Dhabi with the Louisiana Sugar Refinery unloading dock was the failure of the master to ensure the ship’s propulsion engine was ready to maneuver while the vessel was anchored in a river with high water conditions.

As ever, you have to read the entire brief to get the whole story. Download it HERE