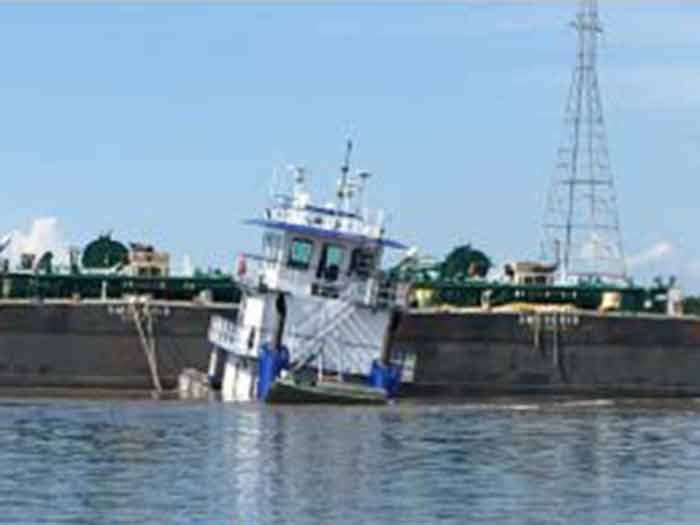 SEPTEMBER 21, 2018 — The National Transportation Safety Board has released a Marine Accident Brief on the September 5, 2017 partial sinking of the Savage Inland Marine towing vessel Savage Ingenuity.

The incident occurred when the crew of the Savage Ingenuity was maneuvering two empty tank barges in the Gulf Intracoastal Waterway near mile marker) 245 in Sulphur, LA, with the assistance of another vessel.

While the tow’s starboard side was almost perpendicular to the current, the vessel heeled to starboard and flooded through an open engine room door. The towboat sank partially, its bow being held above the water by the head line connected to the barges.

All five crewmembers escaped to the barges without reported injury. Approximately 11,800 gallons of diesel oil were released into the waterway, most of which was not recovered.

​The National Transportation Safety Board determines that the probable cause of the flooding and sinking of the towing vessel Savage Ingenuity was the absence of company procedures requiring the closure of weather deck doors at all times while the vessel was under way, which resulted in rapid downflooding into the engine room when the vessel heeled while perpendicular to a strong current with the head of its tow pushed into a river bank.