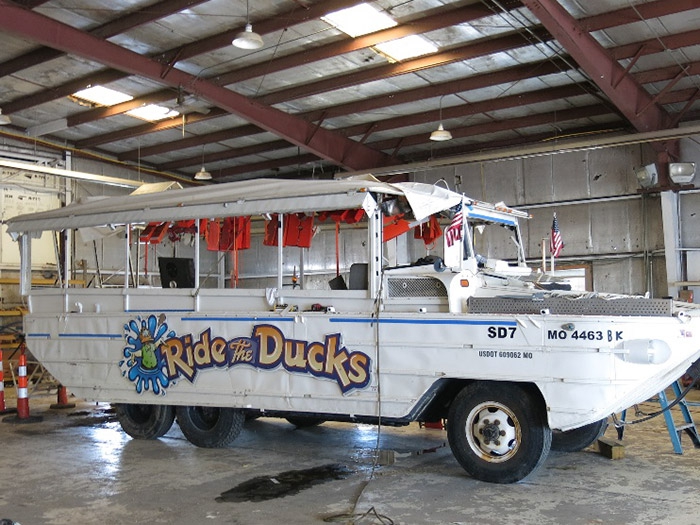 AUGUST 7, 2018 – The National Transportation Safety Board (NTSB) today released its preliminary report on the July 19, sinking of the amphibious passenger vessel Stretch Duck 7 in Table Rock Lake, near Branson, Missouri, with the loss of 17 lives.

Perhaps the most telling thing to emerge from this early report is the post-accident picture of the recovered Stretch Duck 7. It shows several orange life jackets hanging from the vessel’s canopy.

Failure of the passengers to wear life-jackets and the role of the canopy in impeding passenger escape are likely to figure prominently in the law suits (see earlier story) being brought in the wake of the tragedy.

At this stage, though, the NTSB makes no mention of these issues in its preliminary report.

Following is the full text of the report:

On Thursday, July 19, 2018, about 7:05 p.m. central daylight time, the amphibious passenger vessel Stretch Duck 7 owned and operated by Ride the Ducks Branson sank in Table Rock Lake, near Branson, Missouri. Local area forecasts for the time of the accident included thunderstorm warnings and data indicated winds of over 70 mph were encountered by a nearby vessel. The Stretch Duck 7 was carrying 31 persons: 29 passengers and two crew members. The vessel sank in approximately 15 feet of water and came to rest on the lake floor at a depth of 70 feet. Seventeen persons died, including one crew member.

Local first responders located the victims and transported the survivors to local hospitals. Table Rock Lake is a navigable waterway and the Stretch Duck 7 was a Coast Guard-inspected passenger vessel. The United States Coast Guard declared the accident a major marine casualty, and the NTSB is the lead federal investigative agency.

On Friday, July 20, the day after the accident, the NTSB launched a full team to Branson. The Coast Guard, the Missouri State Highway Patrol, the National Weather Service, and Ride the Ducks Branson were named as parties to the investigation. The Stretch Duck 7 was salvaged on Monday, July 23 and transported to a secure facility. Investigators inspected and tested operational systems aboard the vessel.

The Stretch Duck 7 was equipped with a video recording system, which was recovered from the sunken vessel by the highway patrol dive team and sent to the NTSB laboratory. Investigators are attempting to access data on the system’s hard drive. A data (SIM) card for the video recording system was also recovered. The card’s video files were accessed by engineers at the NTSB laboratory and viewed by the investigative team. Other electronic devices such as cell phones and a camera were recovered and shipped to NTSB labs. Weather data from the accident was collected, including wind speeds(anemometer readings) from nearby weather stations.

Thirty-three interviews of witnesses, vessel operators, inspectors, and company officials were conducted on scene. The investigative work and interviews will continue, and the NTSB will participate in the upcoming Coast Guard Marine Board of Investigation.

The Stretch Duck 7 was an amphibious vehicle that took passengers on tourist excursions through Branson on land as well as in the waters of Table Rock Lake. These amphibious vehicles are either military-modified, known as DUKW boats, or purpose-built, commonly referred to as DUCK boats. Both types are operated by different companies around the United States and the world. The NTSB has investigated other amphibious vessel accidents, including the 1999 sinking of the DUKW boat Miss Majestic near Hot Springs, Arkansas; the 2010 collision between a DUKW boat and a tug and barge in Philadelphia, Pennsylvania; and the 2015 road collision between a DUKW boat and a motor coach in Seattle, Washington.

After the 1999 sinking of the Miss Majestic, the NTSB identified vehicle maintenance, Coast Guard inspections, reserve buoyancy, and survivability as safety issues, and issued Safety Recommendations to the Coast Guard, states, manufacturers, operators, and service providers..