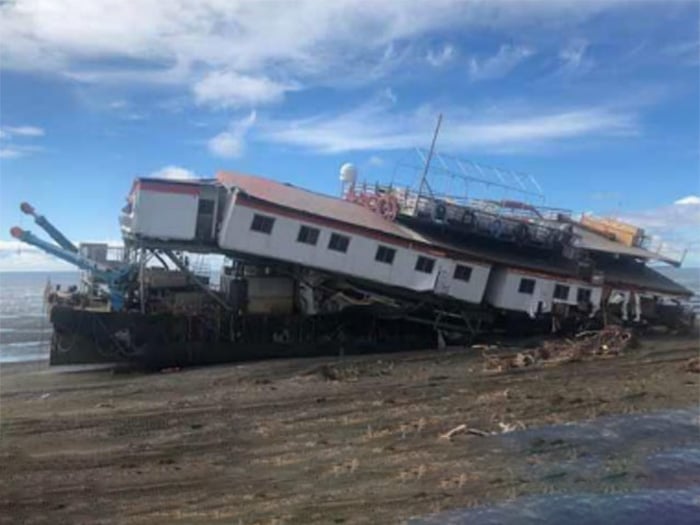 A fatigue crack ultimately led to a fishing tender barge breaking loose from its mooring buoy and grounding during a storm near Ekuk, Alaska, the National Transportation Safety Board (NTSB) said in a Marine Investigation Report released Tuesday.

The fishing tender barge, the SM-3 broke free from the buoy it was anchored to and began drifting on August 30, 2020. The six-person crew deployed two emergency anchors, but the barge continued to drift and grounded on the beach. No injuries were reported. There was a three-mile debris field on the beach. The vessel sustained damage estimated at $4.5 million.

As ever the bare bones summary released by the NTSB, doesn’t tell the whole story that comes out in the full report. For example if you’re not familiar with exactly what a fishing tender barge is, this one began life in 1966 as a deck barge and until 2017, when it was purchased by Northline Seafoods, was primarily used for berthing and logging operations in Dall Island, Alaska.

In 2018, the barge was towed to Sitka, Alaska, and in January 2019, the hull framing and plating was extensively renewed, and the vessel was converted to a fishing tender barge, with four decks.

The full report, also gives some insights into work on board the vessel.

“During the season, the SM-3 provided tender services (ice, fuel, and water) to fishing boats that operated in the area that came alongside the SM-3 to sell their catch, and also ‘processed’ fish. Up to 40 crewmembers, led by the person in charge (PIC), who was also the company’s chief executive officer, worked on board the SM-3 in 12- to 16-hour shifts to freeze fish whole, box fish, and transfer pallets of frozen salmon over a ramp to the holding barge [the Riverways-11], by fork truck. When the holding barge had enough frozen fish to fill six containers, a contract vessel with deck containers tied up alongside the SM- 3, and the SM-3’s deck cranes offloaded cargo onto the contract vessel for transport to Dillingham, Alaska, 21 miles north of where the vessel was anchored.

“About 2.5 months after the season began, on August 19, the SM-3 ended major fish operations with 17 crewmembers on board,” says the NTSB report. “The crew took the next few days to freeze and move fish, wrapping up the season. By August 23–24, all but eight crewmembers (six for barge line handling and two for the Sea Mount) had been paid and sent home. The remaining crew, which included the PIC, senior deckhand (who was also the IT manager), operations manager, fish house manager, and two deckhands on the SM-3, and a captain and deckhand on the Riverways-11, began preparing the barges for winter layup. The PIC and IT manager discussed their need for a 3-day window of good weather to move both barges to their separate winter layup locations.”

A storm blew through the area on August 30 with winds estimated at 50 to 60 mph. The storm resulted in forces that exceeded the capability of the mooring buoy, the weakest link in the barge’s ground tackle system. Once freed from the buoy, the barge drifted and eventually settled on a beach. The following morning the crew evacuated the vessel and were picked up by locals.

​The NTSB determined the probable cause of the grounding was a fatigue crack in one of the mooring buoy’s padeye welds, which resulted in the padeye separating from the buoy’s spherical steel plating, causing the barge to break free from its buoy and anchors and drift ashore during a storm.

“In addition to fitting mooring chains of sufficient length to provide adequate scope for anchorages, mariners must consider the strength of each component of a ground tackle system and should reference marine standards for design,” the report said. “Bending loads can be significantly higher than straight-line pull. The working load limit of each component should be equal to or greater than the ground tackle system’s maximum calculated load to avoid weak points in the system.”

​The NTSB determined the probable cause of the grounding was a fatigue crack in one of the mooring buoy’s padeye welds, which resulted in the padeye separating from the buoy’s spherical steel plating, causing the barge to break free from its buoy and anchors and drift ashore during a storm.