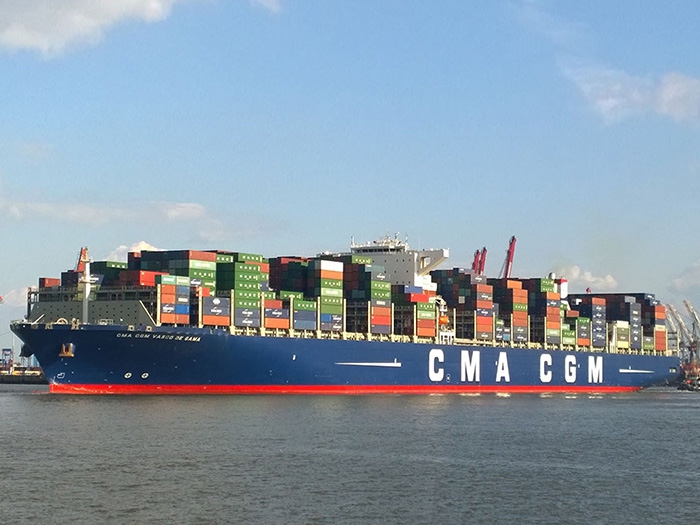 It covers the August 22, 2016 grounding of the ultra large container vessel CMA CGM Vasco de Gama on the western side of the Thorn Channel whilst approaching the Port of Southampton.

The 17,859 TEU vessel was the largest U.K.-flagged vessel at the time and had two of the port’s specialist containership pilots onboard. One of the pilots had control of the vessel’s navigation at the time of the grounding.

The ship ran aground on a rising tide and on a flat shingle/sand sea-bed. A combination of tugs and ship’s engines enabled it to be re-floated soon after grounding.

MAIB say that the investigation found that the vessel’s bridge team and the port’s pilots had the experience, knowledge and resources available to plan and execute the passage effectively.

However, the standards of navigation, communication and effective use of the electronic charting aids onboard did not meet the expectations of the port or the company.

A detailed plan had not been produced; the lead pilot had not briefed his plan for the turn round Bramble Bank; the bridge team’s roles and responsibilities were unclear. There was an absence of a shared understanding of the pilot’s intentions for passing other vessels, or for making the critical turns during the passage.

Neither the ship’s Electronic Chart Display and Information System (ECDIS) not the pilot’s Portable Pilot Unit (PPU) functionality were fully utilized and resulted in each system not providing adequate cross checks or alarms.

MAIB says that the increasing size of vessels within restricted waterways, is leading to reduced margins of operational safety, and therefore the importance of proper planning and monitoring of the passage cannot be overemphasized.

“The grounding occurred because the vessel was too far north of the intended track when the turn into the Thorn Channel was commenced,” says the report. “This reduced the sea room available for the maneuver and, given the environmental conditions, CMA CGM Vasco de Gama was unable to sustain the rate of turn required to remain in the dredged channel.

“The execution of the vessel’s turn around Bramble Bank and into the Thorn Channel by the lead pilot was not in accordance with the port’s guidance for large inbound vessels.

“CMA CGM Vasco de Gama’s bridge team, assistant pilot and the Vessel Traffic Services, could not usefully monitor the lead pilot’s actions, or the vessel’s progress through the Precautionary Area. This was because a detailed pilotage plan had not been produced; the lead pilot’s intended manoeuvre around Bramble Bank was not explained; the bridge team roles and responsibilities were unclear; and the electronic navigation aids on board were not fully utilized.”

The investigation identified that the vessel’s bridge team and the port pilots had the experience, knowledge and resources available to effectively plan and execute the pilotage.

“However,” says the report, “the standards of navigation displayed during the pilotage fell short of the standards expected by CMA Ships and Associated British Ports. It was apparent that complacency and a degree of over confidence on the part of the master and port pilots contributed to this accident. However, it was also apparent from recent similar incidents and the findings of previous MAIB reports that many of the practices evident in this case were not specific to this single pilotage act, or to CMA CGM Vasco de Gama.”

ABP Southampton has been recommended to improve its bridge resource management for its pilots; to consider the provision of provisional pilotage plans to vessels prior to pilot embarkation; to review its implementation of procedures and to improve standards of communication.

CMA Ships has been recommended to review the implementation of company procedures for passage planning and use of ECDIS and to include pilotage and bridge team/pilot integration in its internal audit process.

The findings of the report will be used by the MAIB as part of a safety study that will investigate the use of modern electronic navigation aids on board merchant vessels, and the impact they have had on navigation practices.