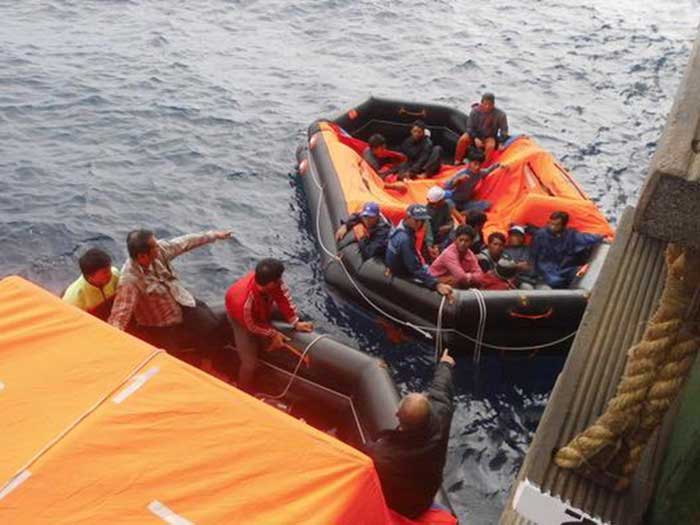 Ever Diadem crew members come to the assistance of distressed seafarers of Hsiang Fuh No. 6

JULY 13, 2017 — The officers and crew of Evergreen Line’s containership Ever Diadem joined forces with another ship on July 9 to successfully rescue thirty seafarers forced to abandon their burning fishing vessel off the coast of Madagascar in the Indian Ocean.

While en route from Singapore to Durban Ever, Diadem’s crew found the distressed seafarers drifting in two lifeboats having abandoned the flaming Hsiang Fuh No. 6, a Taiwan-flagged fishing boat.

Captain Tai Yen-Tang of Ever Diadem immediately notified MRCC (Maritime Rescue Coordination Center, South Africa) and ordered his crew to stand by for a rescue operation. In view of the numbers involved, Captain Tai also requested SBI Antares, a Marshall Islands flag bulk carrier that was nearby, to join the rescue mission.

This region off the African coast is notorious for rampant piracy which posed a potential yet serious threat to the rescue operation. However with the safety of the fishermen paramount, Ever Diadem’s captain and crew braved the risks and succeeded in rescuing sixteen from one of the lifeboats. SBI S Antares then followed up by saving those from the other lifeboat.

Those rescued included three crew members from Taiwan, seven Filipinos, four from Vietnam and sixteen Indonesians. They received good care on board Ever Diadem as the ship continued its voyage to Durban.

Evergreen notified the owners of the fishing boat, requesting that they take responsibility for their crew in Durban and arrange their repatriation.

With the efforts of Ever Diadem crew members, the distressed seafarers of Hsiang Fuh No. 6 were ready to get onboard Ever Diadem, away from the hardship of drifting at sea