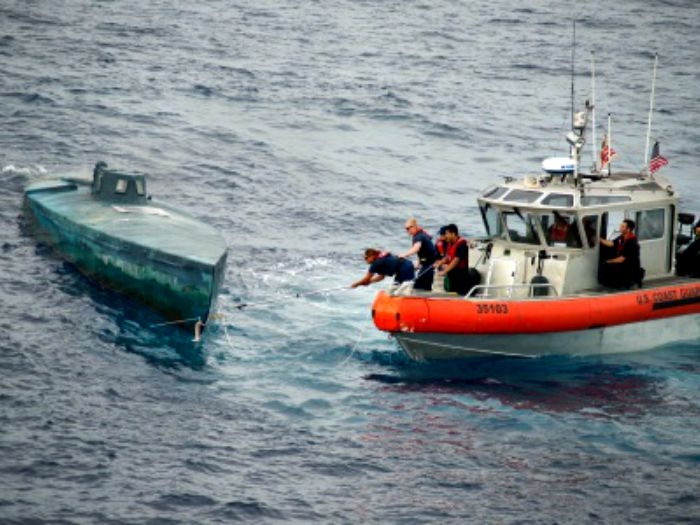 AUGUST 10, 2015—Today, the U.S. Coast Guard is expected to announce in San Diego, CA, record drug seizure rates as the crew of the Cutter Stratton offloads more than 66,000 pounds of cocaine worth $1.01 billion wholesale seized in the Eastern Pacific Ocean.

This includes a seizure of 21,000 pounds of cocaine by the crew of the USCGC Stratton from two different semi-submersible vessels, one of which was the largest such seize in Coast Guard history that we reported on last week.

“This is about more than just trying to keep drugs off U.S. streets,” says Admiral Zukunft. “The cultivation, trafficking and distribution of narcotics fuels violence and instability throughout the Western Hemisphere, leaving a path of destruction directly to the door step of the U.S. We must continue to make progress in our effort to combat transnational organized crime networks to ensure safety and security in our hemisphere.”

Transnational organized crime groups are vying for control of illicit trafficking routes and power in numerous Latin American countries, resulting in increased violence and instability. This has led to record high homicide rates in Central and South America, as well as the Caribbean; eight of the 10 countries with the highest homicide rates in the world are in this region. More than half of the unaccompanied children that crossed the U.S. southern border last year suffered or faced harm from organized crime groups, qualifying for international protection.

“There is still work to be done. We can only act on 30 percent of known drug shipments in the Eastern Pacific and Caribbean,” Admiral Zukunft says. “We must increase already hard earned momentum to curb the rising tide of crime, violence and instability in our hemisphere.”

The more than 66,000 pounds of cocaine is equal to about 33 million lines of cocaine or 336 million hits of crack, according to DEA estimates. Illicit drugs remain a serious threat to the health, safety, security and financial well-being of Americans, costing the U.S. $193 billion annually.

This will be the largest known cocaine offload in Coast Guard history with an estimated street value of more than of $1.01 billion. The drugs were seized in 23 separate interdictions by U.S. Coast Guard cutters and Coast Guard law enforcement teams operating from U.S. Navy vessels in known drug transit zones near Central and South America

Numerous U.S. agencies from the Departments of Defense, Justice and Homeland Security are involved in the effort to combat transnational organized crime including the Coast Guard, U.S. Navy, Customs and Border Protection, FBI, DEA, ICE, U.S. Attorney’s Offices in California, New York, Florida and Puerto Rico, and U.S. intelligence agencies. Allied and international partner agencies play an important role in counter drug operations. The fight against transnational organized crime networks in the Eastern Pacific requires unity of effort in all phases from intelligence to detection and monitoring to interdiction and to prosecution.

During at-sea interdictions in international waters, a suspect vessel is initially located and tracked by allied military or law enforcement aircraft or vessels. The actual interdictions, including the boarding, search, seizures and arrests, are led and conducted by U.S. Coast Guardsmen.

The Coast Guard has increased U.S. and allied presence in the Eastern Pacific Ocean and Caribbean Basin, which are known drug transit zones off of Central and South America, as part of itsWestern Hempshere Strategy.

The Coast Guard Cutter Stratton is a 418-foot national security cutter on a 116-day deployment. Cutters like Stratton routinely conduct operations from South America to the Arctic where their unmatched combination of range, speed, and ability to operate in extreme weather provides the mission flexibility necessary to conduct counter-narcotics, homeland security, and alien migrant interdiction operations, domestic fisheries protection, search and rescue, and other Coast Guard missions at great distances from shore keeping threats far from the U.S. mainland.