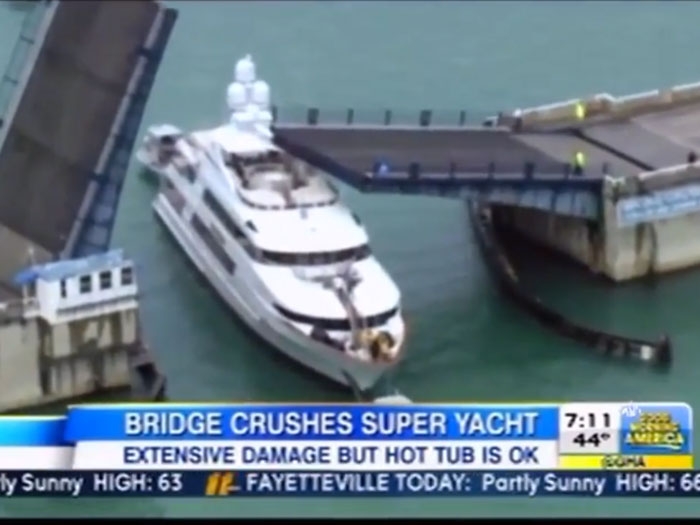 DECEMBER 3, 2014 — Here’s another “bridge hits ship” story. The Coast Guard reports that vessel traffic on the Intracoastal Waterway near Bal Harbor, FL, is restricted following an incident involving a yacht and the Broad Causeway bridge.

The 161-foot yacht, Rockstar, was being towed by two tugboats Tuesday when the incident occurred.  After the vessel was cleared from the involved portion of the bridge, the Rockstar was towed to Fort Lauderdale, Florida.

ABC’s Good Morning America characterized the incident as “an epic fail that is going to cost tens of thousands of dollars” and said that, though the yacht suffered extensive damage, the hot tub was unhurt.

Due to the incident, only the bridge’s west leaf is able to open.  Restrictions on vessel traffic limit movement of large vessels with a width of 40 feet or less as only one half of the bridge is operational.

The 161-foot yacht, Rockstar, was being towed by two tug boats Tuesday when the incident occurred.  After the vessel was cleared from the involved portion of the bridge, the Rockstar was towed to Fort Lauderdale, Florida.

All mariners are urged to exercise caution while transiting through the area, and to check weather before transiting offshore if necessary to detour the area.

The Coast Guard will broadcast updates regarding the bridge via Safety Marine Information Broadcasts via VHF Marine Radio Channel 16.

The Florida Fish and Wildlife Conservation Commission is investigating the incident.

Whether this incident will be characterized as an “allision” or a “collision” depends on whether or not the yacht was moving at the time.