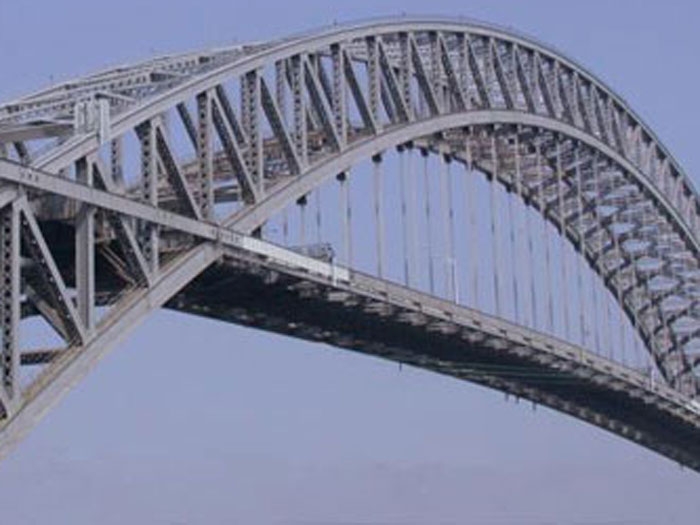 APRIL 23, 2014 — USCG Sector New York has issued a bulletin noting that the Bayonne Bridge has been struck twice within the past four months by ships with an excessive air draft and warns that in future such incidents it will likely seek civil penalties.

The bulletin (MSIB 01-14) notes that the Bayonne Bridge is undergoing a two-year construction project to raise the roadway an average of 65 feet and says that the associated demolition activities and work platforms outside of the navigable channel present serious safety considerations for mariners. Despite previous Coast Guard advisories, the Bayonne Bridge has been struck twice within the past four months. The most recent allision demasted a ship’s INMARSAT C and Ship Safety Alert System antennas. In this case, the Coast Guard is pursuing a civil penalty against the ship’s owner.

To ensure the safety of the bridge work crews, as well as ships navigating in the vicinity of the construction project, each vessel owner, master, or person in charge is reminded to review and update as necessary their ship’s particulars. In accordance with Title 33 Code of Federal Regulations Section 164. 11 (k), this includes knowing the distance from their ship’s keel to its highest point, providing accurate information to the Pilot and the ship’s agent for safe navigation, and clearly indicating whether vessel modification data or any adjustable or whip antennas are included.

Bridge allisions, including ship antenna and mast strikes, may cause severe property damage or even loss of life. Vessels must take proactive measures to ensure they can safely navigate under bridges and other overhead obstructions before attempting such transits. Depending on the facts of future incidents, the Coast Guard will likely pursue civil penalties against any vessel owner, master, or person in charge that provides inaccurate vessel information that contributes to a bridge allision within the New York-New Jersey Captain of the Port Zone. The maximum penalty authorized bythe Ports and Waterway Safety Act is $40,000 per incident.

For current vertical and horizontal clearance information and construction status at the Bayonne Bridge, refer to NOAA Chart 12333, the First Coast Guard District Local Notice to Mariners (LNM) at http://www.navcen.uscg. gov, and http://www.nws.noaa.gov/om/marine/ports.htm.