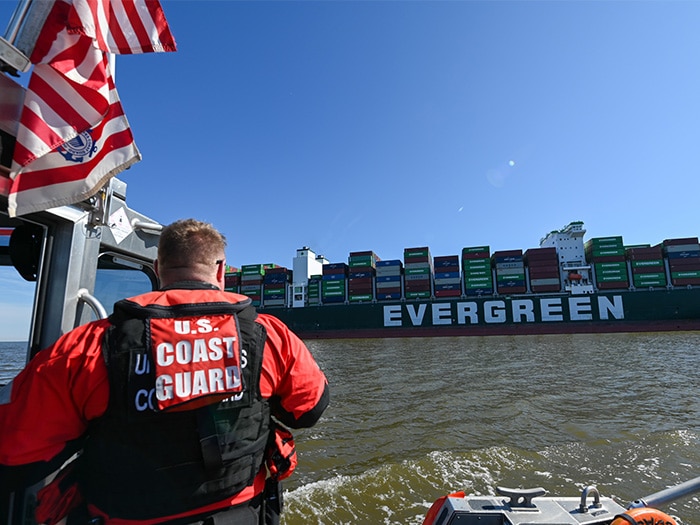 A licensed state pilot’s use of a cell phone while in direction and control of the Evergreen Marine Corporation containership Ever Forward gets considerable attention in the U.S. Coast Guard’s report on its investigation into the March 13, 2022, grounding of the 1,095 feet long and 12,118 TEU vessel in Chesapeake Bay.

According to the the report, “Ever Forward departed Seagirt Marine Terminal in Baltimore, Md., en route to Norfolk, Va., with a licensed Maryland State Pilot, hereinafter referred to as ‘Pilot 1,’ in direction and control of the vessel. The vessel’s departure was slightly delayed due to a line handling issue at the facility.

“Pilot 1 immediately attempted to use astern propulsion to free the vessel. Soon after, the Master returned to the bridge and performed a series of safety checks in accordance with the vessel’s Safety Management System (SMS), prior to continuing efforts to free the vessel. After all safety checks were completed, the Ever Forward bridge team and Pilot 1 continued to attempt to free the vessel using astern propulsion and bow thrusters. At approximately 2031, the Master notified the vessel’s shoreside representative that the Ever Forward required assistance. At approximately 2101, Pilot 1 notified U.S. Coast Guard Sector Maryland-National Capital Region of the grounding. At approximately 2250 and after being relieved by another licensed Maryland State Pilot, Pilot 1 departed the grounded vessel.

“During the outbound transit, Pilot 1 was solely relying on his Portable Pilot Unit (PPU) to navigate the Ever Forward.

“Just prior to the grounding, Pilot 1 exited the active navigation of his PPU to view a previous transit. Pilot 1 also made a series of five phone calls amounting to over 60 minutes of time during the course of his outbound transit. He also sent two text messages and began drafting an email immediately before the grounding occurred regarding issues he experienced with facility line handlers.

“As a result of its investigation, the U.S. Coast Guard determined that the initiating event for this casualty was the grounding. No mechanical issues or equipment failures contributed to this marine casualty. The causal factors that contributed to this casualty include: (1) failure to maintain situational awareness and attention while navigating, and (2) inadequate bridge resource management.”

As ever, you have to read the whole report to get a full picture of what the investigation uncovered, but the Coast Guard has issued two findings of concern in relation to the incident. (By the way, if you think the use by the Coast Guard use of the gender neutral term “their” in these findings implies that the pilot was a woman, according to local media reports he wasn’t and has been identified by the State of Maryland.)

“For approximately half of the two-hour transit,” says one of the findings, “the Pilot on board the container ship placed and received numerous calls, texted messages, and draft emails on their personal cell phone right up until the incident. Additionally, the Pilot admittedly relied solely on their Portable Pilot Unit (PPU) for navigation and was watching playback of a previous transit at the time of the incident. The Pilot was drafting an email on their personal cell phone in the minutes leading up to the planned turn south, when the vessel sailed through its waypoint and grounded. The vessel’s bridge team attempted to cue the pilot by repeating the heading. However, by the time the bridge team became more assertive about the ship’s heading, it was too late to prevent the vessel from grounding.”

“Findings of Concern. Coast Guard investigators identified the following prudent measures to be implemented on vessels in similar service to mitigate the risks associated with the above identified contributing factors:

“Develop and implement effective operational policies outlining when the use of cellular telephones and other devices is appropriate or prohibited.

The main report notes that “following the incident, the Association of Maryland Pilots placed Pilot 1 on administrative leave” and on October 21, 2022, the Maryland Board of Pilots suspended Pilot 1’s license because they ‘found that the public health, safety, and welfare imperatively required this emergency action.’ Pilot 1 is prohibited from providing, attempting to provide, or offering to provide pilotage in the State of Maryland. Pilot 1 is also prohibited from representing to the public, by use of a title, including ‘pilot,’ ‘bay pilot,’ ‘licensed pilot, ‘State licensed pilot’ or ‘Maryland pilot,’ by description of services, methods or procedures, or otherwise. Pilot 1 has requested the opportunity for a hearing on this matter.”

The other finding of concern relates to bridge resource management. It notes that approximately 30 minutes before the grounding, the bridge team had completed a scheduled watch relief and was comprised of the Pilot, the Third Officer, a Deck Cadet, and an Able Bodied Seaman. The Master was below decks for the evening meal at the time of the casualty.

“The Third Officer correctly understood the Pilot to be in direction and control of the vessel, and he felt hesitant to speak up as the purpose of the pilot is largely to act as the local geographic and navigational expert on board the vessel. The Third Officer and two other members of the bridge team did not directly alert the pilot to the dangerous situation or summon the Master, until after the vessel had grounded.

“In this case, the ship’s Safety Management System (SMS) dictated that if the vessel experiences difficulty maintaining course or any doubts arise in regard to the vessel’s situation, the officer on watch shall call the Master. All officers were required to review and sign that they understood this instruction.

“Coast Guard investigators identified the following prudent measures to be implemented on vessels in similar service to mitigate the risks associated with the above identified contributing factors:

• Ensure and promote crew awareness of policies regarding the duties and obligations of officers on watch for the safety of the ship, even when a pilot is embarked.

• Promote a safety culture that when a pilot is embarked, the bridge team supports and is an integral part of the process of continual communications with the pilot for the duration of the transit.”