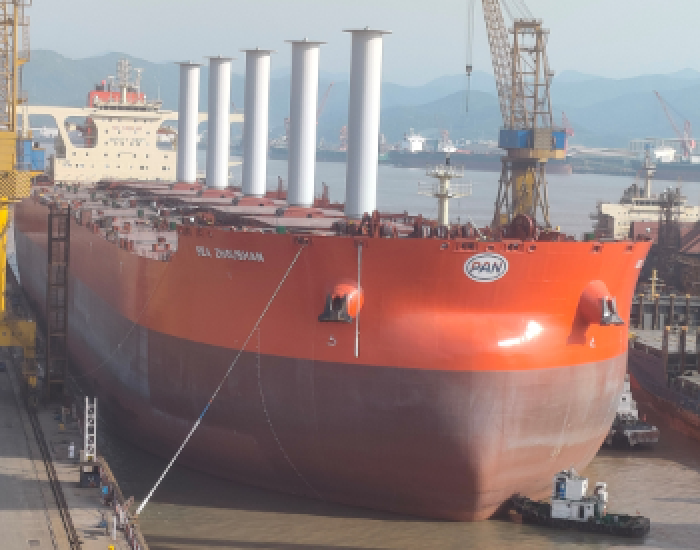 Mining giant Vale says that if the pilot rotor sail project proves effective, some 40% of its fleet could use the technology, which would result in a reduction of almost 1.5% of Vale’s annual iron ore maritime transport emissions. (Credit: Vale)

If you didn’t get the message that shipping needs to decarbonize, welcome back from your vacation on Mars. The International Maritime Organization has set what the International Chamber of Shipping describes as an “ambitious” goal of reducing total GHG reductions from shipping by 50% by 2050. In terms of the difficulty of achieving it, the goal is, indeed, ambitious. In terms of having a meaningful impact on slowing global warming, it is seen by many as “modest.”

Influential NGO Transportation & Environment has called the emissions strategy most likely to be adapted at this month’s session of IMO’s Marine Environmental Protection Committee as “ineffective” and has called on governments to include shipping within their national and regional carbon reduction plans.

Meantime, the Biden administration is on record as “committing to work with countries in the International Maritime Organization to adopt a goal of achieving zero emissions from international shipping by 2050,” a much greater reduction than the present target.

Pressure is growing for “market based measures” to be introduced that range from a levy on bunker fuels to some kind of tax on emissions from individual ships. Up for consideration at this month’s session of IMO’s Marine Environmental Protection Committee will be a proposal from the Marshall Islands and the Solomon Islands for a levy of 100 dollars per tonne of CO2 emitted. It is also likely that ships calling European Union ports will be included in the EU’s Emissions Trading Scheme (ETS).

Existing Ships Will Need Fixes, Too

Among other things, the upcoming MEPC session is expected to endorse an amendment to the MARPOL convention that will require existing ships to meet new Energy Efficiency Existing Ship Index (EEXI) regulations that will penalize ships falling short of certain energy efficiency standards. Enforcement is likely to start January 1, 2023.

Speaking as part of a panel at a recent webinar, Sean McLaughlin, Strategy Consultant at Houlder Ltd. noted the “emergence of multiple decarbonization drivers which can present a perplexing maze for shipowners and operators. From charterers looking for more efficient ships and banks seeking to improve the environmental performance of their loan books to the ever-present IMO regulatory targets, shipowners are being forced to act now.”

EEXI compliance looks like it will become a priority.

“DNV estimates that 80% of ships will require some investment to meet EEXI requirements,” said McLaughlin. “However, different measures address different audiences. This means that it is vital that shipowners are clear about which targets they need to meet and ensure that investment is targeted at the most effective solutions.”

“The quandary is that compliance with EEXI doesn’t necessarily improve a vessel’s other ratings, it may not even deliver significant actual performance improvement,” said McLaughlin. “The key to success will be to carefully consider all potential improvement measures, not just those required to meet EEXI. Owners need to start with the ship and not a list of technologies.

“Thinking about both the cash and the carbon return on investment is key. Genuine operational improvements are likely to meet regulatory requirements but with a narrow focus on EEXI, the opposite may not be the case. There are plenty of options for improving hydrodynamic, mechanical, electrical or operational performance. Future fuels are an important consideration but focus on what can be changed now.

“Delaying action is not an option, and shipowners should not expect any finance to be a different color to green,” concluded McLaughlin. “If shipowners don’t manage business risk, they won’t get funding. Acting now will ensure shipowners and operators can both achieve compliance and protect commercial operations for the years ahead.”

Does the Tech Exist?

Does the technology even exist to get us to the  “zero by 2050” ambition?  If you’re talking coastal and short sea shipping, the answer is yes. For ocean going ships, the technology remains in development. In either case, getting to zero will be dependent on massive rollout of offshore wind or other renewable energy sources. That’s because, while coastal vessels, such as tugs and ferries, can be all-battery powered, those batteries have to be charged and, unless that electricity is green, those tugs and ferries won’t be.

When it comes to oceangoing ships, it looks very much like the propulsion plant of the future will be the internal combustion engine. It’s been said that “you can burn anything in a diesel engine,” and that would certainly seem to apply to the zero-carbon fuels now most under consideration, ammonia and hydrogen. Both MAN Energy Solutions and Wärtsilä are developing ammonia-fueled engines and BeHydro (a joint venture of shipowner CMB and ABC Engines) has launched a 1MW hydrogen powered four-stroke.

The big problem here is not the tech, it’s the availability of large volumes of green ammonia and green hydrogen, produced using green electricity, and the development of logistics chains to get them into ships.

While those contemplating newbuildings in the near future wait for these technologies to come to market, owners seem more ready to contemplate solutions that deliver measurable improvements in fuel efficiency and thus emissions reductions. These include rotor sails — which just got a major endorsement in the shape of a decision to install five of them on a 325,000 dwt Very Large Ore Carrier (VLOC) newbuilding under construction in China for charter to Brazilian mining giant Vale has been fitted with five Norsepower Oy tilting rotor sails. Tilting the rotor sails, using hydraulic cylinders, will enable efficient cargo operations.

Pan Ocean Ship Management owns the vessel. Norsepower has analyzed the routes for the vessel on its charter to Vale and estimates that the rotor sail technology would be able to achieve an efficiency gain of up to 8% and a consequent reduction of up to 3,400 tons of CO2 per year.

“We are committed to supporting the adoption of clean technology solutions for shipping to ensure that Vale’s sustainability objectives are achieved,” said Rodrigo Bermelho, Shipping Technical Manager at Vale. “Installing five rotor sails will maximize our fuel and emissions savings. We are working with Norsepower to ensure this newbuild is as environmentally friendly as possible and can achieve significant reductions in fuel consumption and CO2 emissions. If the pilot proves effective, it is estimated that at least 40% of the fleet will be able to use the technology, which would result in a reduction of almost 1.5% of Vale’s annual iron ore maritime transport emissions.”

A smaller bulker, an 82,000 dwt Kamsarmax bulk carrier is to be retrofitted with three Anemoi Marine Technologies Ltd. rotor sails, under what is described as “a commercial agreement” signed by Anemoi and TR Lady Shipping Ltd., a portfolio company of Tufton Investment Management Ltd. Bd.

Under the agreement, the CS Marine designed bulker TR Lady, built in 2017 by Yangzijiang Shipbuilding Group and managed by Tufton, will be fitted with three large Anemoi rotor sails. They don’t tilt, but are fitted with an Anemoi-patented rail deployment system, allowing them to be moved across the deck to minimize their impact on port operations.

TR Lady will be retrofitted with the rotor sails during scheduled drydocking of the vessel. Anemoi will provide full project management, supply and delivery of the system equipment. Work will be undertaken at a Chinese yard and is scheduled to be completed in mid-2022. Class approvals will be awarded by Lloyd’s Register.