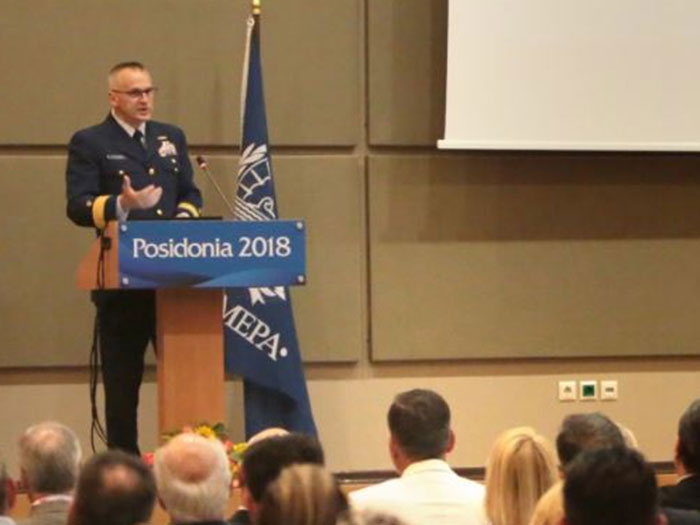 JUNE 19, 2018 — “We don’t believe there will be a shortage of 0.5 percent compliant fuel,” Rear Admiral John Nadeau, USCG, assistant commandant for prevention policy, said in a panel discussion at Posidonia this month, giving a Coast Guard perspective on the IMO 2020 sulfur cap.

Admiral Nadeau noted that there had been some anxiety as the 0.1 percent sulfur limit approached.

“Vessel operators needed to think about how to: source their fuel; develop bunkering procedures to avoid unintentional mixing of the ECA compliant fuel with high sulfur content fuels; develop strategies and procedures for changing over and switching fuels before entering and departing the ECA boundary; develop procedures and plans and conduct training to do this safely; and, finally, keep records and logs of these actions.

“Generally speaking, the availability of compliant fuel oil has not been a problem. In many cases failure to get compliant fuel is a result of poor voyage planning, not a shortage. If despite, their best efforts, vessel operators were unable to acquire ECA compliant fuel because it was not available, they could report these instances to the EPA.

“We don’t believe there will be a shortage of 0.5 percent compliant fuel. The study done by the IMO concluded there may be instances of regional non-availability during implementation of the new cap, but this can be managed through the transport of compliant fuels to areas where it is not available.

“The Coast Guard conducts approximately 9,500 regularly scheduled Port State Control exams every year, and Annex VI compliance checks and enforcement are a part of those. In the last three 3.5 years, we’ve seen 80 deficiencies and over a dozen enforcement actions resulting in civil penalties or fines for, among other violations, failure to switch fuels before entering the ECA, failure to burn compliant fuel, and incomplete bunker delivery notes and other records.

“We agree with industry concerns that without consistent global implementation and enforcement of the 0.5 percent global cap in 2020 some shipowners will be afforded a competitive advantage over those companies that do comply. As with all environmental requirements, you can expect to see a strong effort within our Port State Control program to ensure compliance with these sulfur limits. If during a Port State Control boarding we discover that a vessel has used fuel exceeding the sulfur cap beyond our ECA, we will refer the evidence to the vessel’s flag state for further investigation and enforcement action. On U.S. vessels we will take action just as we do now.

“If IMO adopts a carriage ban on fuel exceeding the 0.5 percent sulfur cap, we will participate in enforcement as appropriate. The IMO Pollution, Prevention, and Response Subcommittee is meeting next month to consider measures to support consistent implementation of the global cap. The U.S. supports this effort and stands ready with our colleagues to share lessons and experience.”