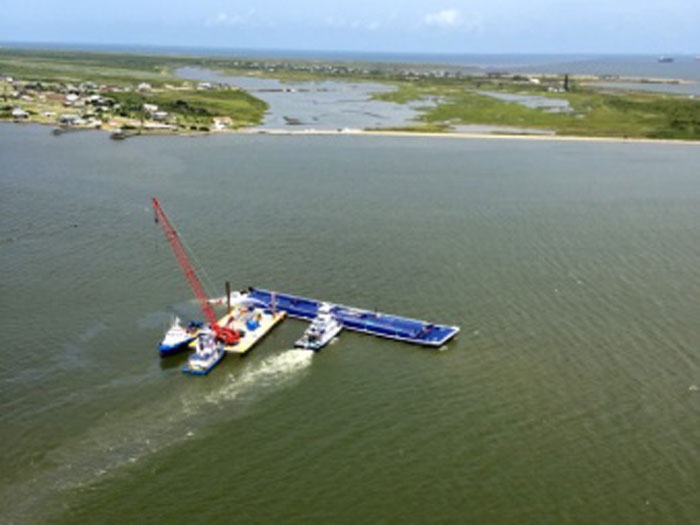 AUGUST 7, 2015—Two loaded naphtha barges under tow recently collided with two cumene barges in the busy Gulf Intracoastal Waterway along the Bolivar Peninsula, Texas, near the Houston Ship Channel, sparking a fire onboard one of the naphtha barges.

Operating under its OPA 90 Salvage and Marine Firefighting agreement, T&T Salvage responded to the incident, which occurred on July 20 at about 1:20 AM. On-scene in less than two hours with a full-suite of company-owned industrial firefighting equipment and a seasoned marine firefighting crew, T&T Salvage extinguishd the fire on the barge using Pyrocool, a fire extinguishing foam, in less than an hour after arriving on-site.  The barge was carrying about 1 million gallons of naphtha, a highly volatile gasoline additive.

After cooling and stabilizing the damaged barge, both naphtha barges were towed to a safe location and the cargo was safely transferred to receiving barges to prevent any environmental impact using T&T’s portable hydraulic pump systems.

Responding to spill in South Louisiana

As T&T Salvage was completing this successful firefighting and salvage operation, it was called on to conduct an in-situ burn of an oil spill caused by a pipeline rupture in South Louisiana.  In-situ burning of oil spills can be more effective than traditional mechanical oil recovery methods, minimizing long-term environmental impacts to sensitive marshes and wetlands. T&T Salvage also successfully completed an in-situ burn in 2014 at the Delta National Wildlife Refuge that was praised by the U.S. Coast Guard. Working within a Unified Command led by the Coast Guard again this year, T&T Salvage firefighters safely ignited the oil spill and provided contingency fire suppression services to ensure another safe and effective response operation.

Another example of T&T’s rapid response capability came in the early hours of May 22, 2015 when T&T was activated to respond to a fire on a Gulf of Mexico Platform. T&T quickly mobilized personnel and equipment to a Louisiana dock where it was loaded on a fast supply vessel and transported to the scene. The assets were then transferred to a lift boat and the fire team proceeded to cool the adjacent areas and extinguish the fire later that evening. Once extinguished the team boarded the platform and confirmed it was safe for boarding.

Jim Elliott, Vice President of T&T Salvage, says, “We consistently strive to be the fastest, safest and best in marine emergency response operations.  These recent firefighting responses are a testament of T&T’s ability to quickly respond to a major marine casualty and effectively save property, protect the environment and prevent crew injuries.”