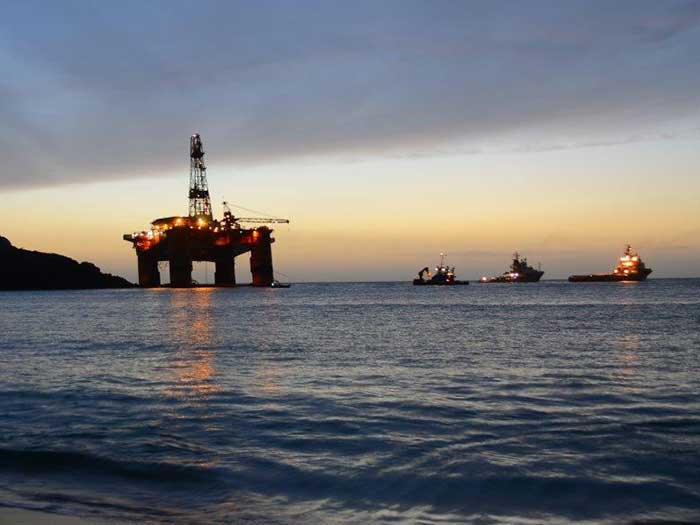 AUGUST 23, 2016 — The U.K. Maritime & Coastguard Agency reports that the drilling rig Transocean Winner that ran aground in bad weather on the Isle of Lewis nearly two weeks ago has been successfully refloated and stabilized and is now under tow to safer waters.

The rig was refloated from Dalmore Bay at 10.00 pm MondayAugust 22 and today was under tow by support vessels at about 1-1.5 knots per hour to Broad Bay, some 40 miles away.

Earlier this morning, the flew MCGA its Counter Pollution verification aircraft over Dalmore Bay to examine the water for any sign of discharge, sheen or pollution from the rig. There was no pollution reported in the Dalmore Bay area.

The verification aircraft continued to follow the path of the rig and has detected a slight sheen which is associated with the ongoing pressurization of tanks to maintain the rig’s stability.

Briggs Environmental is accompanying the tow and is assisting by
breaking up the light sheen. Additional counter pollution equipment is on board the support vessels at immediate readiness should it be required.

A Temporary Exclusion Zone remains in place at Dalmore Bay until the seabed has been thoroughly checked for any debris or environmental impact.

A Temporary Exclusion Zone of 1,000 meters has also been established in Broad Bay.

Hugh Shaw, the Secretary of State’s Representative (SOSREP) for Maritime Salvage & Intervention said: “‘We are taking advantage of the favourable weather conditions following this big step forward, and we will continue to closely monitor the rig whilst it is under tow. By all accounts the rig appears to be in a stable condition, and is now due to reach Broad Bay tomorrow morning. Once everything is declared safe, I will be looking at releasing the exclusion zone in Dalmore Bay.

“I would like to offer my sincere thanks to the Western Isles Council and community for their patience and their gracious hospitality during this challenging and disruptive period. This salvage operation has required the united cooperation from so many different organisations who have spared no effort to ensure that this rig reaches safer waters. I would like to specifically mention Salvage Master, Sylvia Tervoort and the Smit Salvage team, Transocean, Briggs Environmental, Western Isles Council and local community, Scottish Environment Group and other supporting government departments, the Maritime & Coastguard Agency, the emergency services – not to mention all the other supporting organizations, stakeholders and businesses who’ve assisted in this operation.”