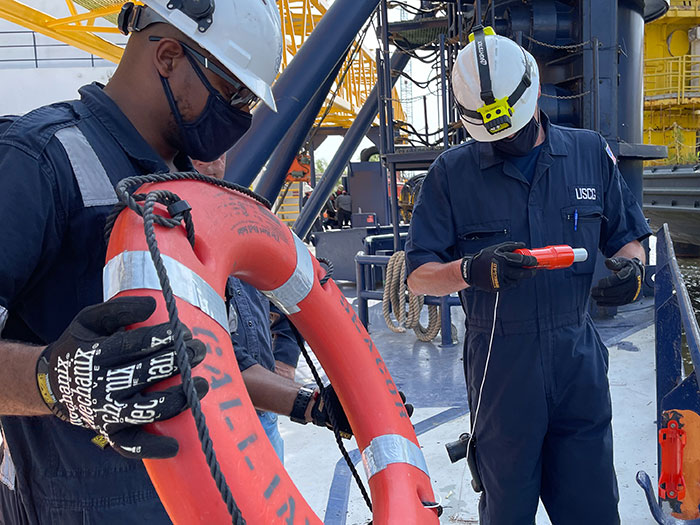 Coast Guard Marine Inspectors Adrian Hill and Matthew Sherman inspect a SEACOR Eagle life ring and light for its condition in Houma, Louisiana, April 23, 2021. The crew and vessel was inspected by Coast Guard marine inspectors for readiness and approval to be used as an asset for the SEACOR Power response. [U.S. Coast Guard photo by Petty Officer First Class Nicole J. Groll]

While the United Cajun Navy and other volunteers still continue to search for the seven still missing crew members from the fatal SEACOR Power lift boat capsize in which six crew members died ives, the vessel’s owner SEACOR Marine is now turning its attention to the salvage of the vessel.

In a statement released yesterday, the company said:

“We continue to grieve for our crew members, partners and the loved ones of those who were lost. Their memories will live long in our hearts, minds and communities. We are grateful for the efforts of the U.S. Coast Guard, Donjon-SMIT and the dive team from Phoenix International, who have worked with us to lead our search and rescue efforts. As those efforts come to a close, Donjon-SMIT and Phoenix International will transition to salvage operations and vessel recovery of the SEACOR Power. We remain focused on supporting our team members and their families and will keep them in our prayers.”

A Unified Command, led by Coast Guard Capt. Wade Russell and Joseph Ruiz, a general manager at SEACOR Marine, met Monday to start implementing the salvage and wreck removal operations, which will include the removal of fuel and and oil from the 234-foot vessel.

The lift boat was carrying a maximum potential of 35,000 gallons of fuel, lube oil, hydraulic and waste oil, when it capsized, says the Coast Guard.

One asset that will likely be used in the salvage and marine environmental response effort is another SEACOR Marine lift boat, the SEACOR Power. That vessel has been in dry docj for repairs and, last Friday, Coast Guard marine inspectors from Marine Safety Unit Houma and Lafayette inspected the vessel top to bottom to ensure that it was in safe and good condition. The inspection also included crew drills.