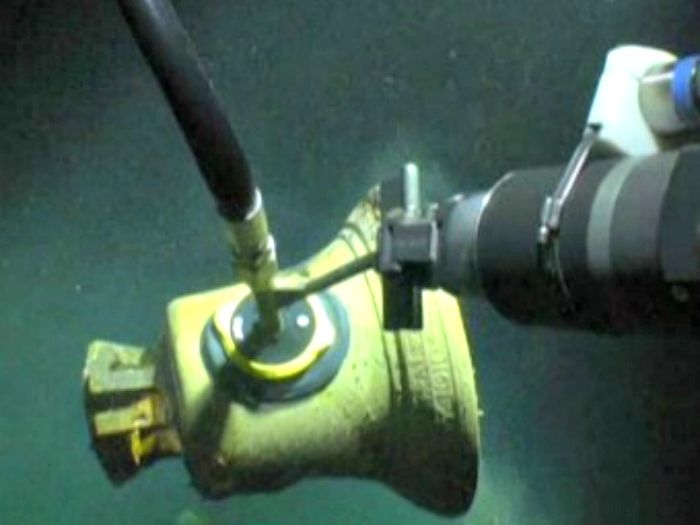 Bell of HMS Hood being recovered by ROV

AUGUST 11, 2015—A research team led by U.S. philanthropist and entrepreneur Paul G. Allen  successfully recovered the bell of the battlecruiser HMS Hood on August 7 in the Denmark Strait. The HMS Hood was sunk in 1941 during World War II during a sea battle with the Bismarck. Some 1,415 men were lost when the HMS Hood was sunk.

Once the bell is restored, it will be put on display at the National Museum of the Royal Navy in Portsmouth, U.K.

Allen’s team led the operation using his yacht M/Y Octopus, which is equipped with a state-of-the-art remotely operated vehicle (ROV). Allen, best known as the co-founder of Microsoft with Bill Gates, is a billionaire philanthropist and owner of the NFL’s Seattle Seahawks and the NBA’s Portland Trailblazers. He recovered the bell at no cost to the Ministry of Defence or the Royal Navy.

“This year marks the 70th anniversary of the conclusion of World War II, and this effort commemorates the hundreds of brave sailors who were lost at sea,” says Allen. “It is a true honor to undertake the expedition to recover the bell from ‘The Mighty Hood’.”

The bell was first discovered and photographed in July 2001. The bell was found lying on the seabed well away from the parts of the battlecruiser’s hull. A 2012 Allen-led expedition to recover the bell was hampered by prevailing weather conditions and technical difficulties.

Both operations were supported by Blue Water Recoveries Ltd., which specializes in the search and investigation of shipwrecks.

The bell is in good condition but will require a year-long expert conservation and restoration effort because it has spent so long in deep seawater.

Blue Water Recoveries Director David Mearns says that he was “extremely pleased” to recover the ship’s bell to fulfill one of the last wishes of Ted Briggs, one of only 3 survivors of Hood’s crew of 1,418 men.

“Despite 74 years of immersion in the hostile depths of Denmark Strait, the bell is in very good condition,” says Mearns. “The inscriptions decorating its surface clearly indicate that the bell was preserved for use on the battlecruiser Hood after first being used as the bell of the Battleship Hood from 1891 to 1914.  This bell has therefore seen action in two Capital ships of the Royal Navy spanning a period of 50 years.  An engraving on the bell also records the wishes of Lady Hood who launched the ship in memory of her late husband Rear Admiral Sir Horace Hood KCB DSO MVO who was killed in the battle of Jutland.  The bell we recovered is a unique historical artifact, which shows just how important Hood was as flagship of the British Battlecruiser Squadron.  This was clearly a special bell for a special ship and it will forever serve as a fitting memorial to the Mighty Hood and a reminder of the service and sacrifice of her men.”

First Sea Lord, Admiral Sir George Zambellas, says: “A magnificent symbol of the power of the Royal Navy in the inter-war years, ‘The Mighty Hood’ is one of the greatest fighting ships in our nation’s long and glorious maritime history. That she was lost with her guns thundering in defense of the convoys that formed Britain’s lifeline is a tragic reminder of the high price that our island nation paid for survival, and for the freedom and prosperity we enjoy today. Her story, her sacrifice, continues to inspire the Royal Navy today.”

HMS Hood is the largest Royal Navy vessel to have been sunk, causing the largest loss of life suffered by any single British warship and the recovery is fully supported by the HMS Hood Association whose members include veterans who served in the ship before her final mission in 1941, and relatives of those lost with her.

President of the Association is Rear Admiral Philip Wilcocks, whose uncle was among those who died on board HMS Hood. Admiral Wilcocks says: “The HMS Hood Association is extremely grateful to Paul Allen, David Mearns and the crew of M/Y Octopus for their tremendous efforts and professionalism in recovering the bell of HMS Hood from the dark depths of the Denmark Strait. In particular, Paul Allen’s support has been outstanding and we applaud his personal commitment to the recovery operation.

“There is no headstone among the flowers for those who perish at sea. For the 1,415 officers and men who lost their lives in HMS Hood on May 24, 1941, the recovery of her bell and its subsequent place of honor in the National Museum of the Royal Navy in Portsmouth will mean that future generations will be able to gaze upon her bell and remember with gratitude and thanks the heroism, courage and personal sacrifice of Hood’s ship’s company who died in the service of their country.”

Once conservation of the bell is complete, it will be put on display by the National Museum of the Royal Navy (NMRN) and will form a major feature of the new exhibition dedicated to the 20th and 21st century Navy, which opened at the National Museum of the Royal Navy in Portsmouth Historic Dockyard in 2014. It is a fitting location as HMS Hood was based in Portsmouth.

Displayed at National Museum of the Royal Navy

Professor Dominic Tweddle, Director General of the National Museum of the Royal Navy says  the bell will be displayed in the museum’s new galleries that “recall and commemorate the heroism, duty and sacrifice of the people of the Royal Navy in the 20 th and 21st centuries.  HMS Hood‘s bell encapsulates the whole of that story as no other single object could.  We already have the bell of HMS Prince of Wales which together with the HMS Hood engaged the Bismarck on May 24, 1941, and it will be splendid to reunite the two ships at least in spirit.”

The wreck of HMS Hood is designated under the Protection of Military Remains Act 1986. As well as providing a memorial, the recovery has prevented it from being taken by any illegal operation for personal gain.