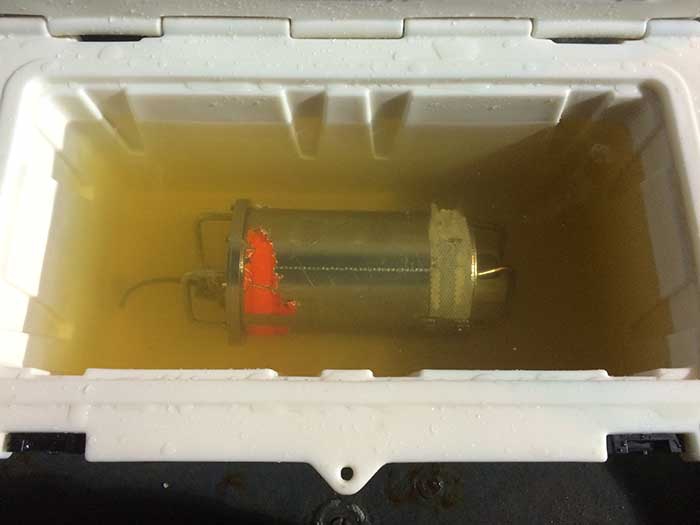 AUGUST 9  — The voyage data recorder (VDR) from El Faro, the TOTE cargo ship that sank during Hurricane Joaquin in October 2015, was successfully recovered from the ocean floor late Monday evening.

The National Transportation Safety Board says the recovery of the VDR capsule caps a 10-month-long effort to retrieve the unit, which is designed to record navigational data and communications between crew members on the ship’s bridge.

Investigators hope the recorder will reveal information about the final hours of El Faro’s voyage and the circumstances leading up to the sinking of the U.S.-flag cargo ship.

“The recovery of the recorder has the potential to give our investigators greater insight into the incredible challenges that the El Faro crew faced,” said NTSB Chairman Christopher A. Hart, “but it’s just one component of a very complex investigation. There is still a great deal of work to be done in order to understand how the many factors converged that led to the sinking and the tragic loss of 33 lives. I want to thank the dedicated professionals in the many organizations — especially the U.S. Navy, the Coast Guard, Woods Hole Oceanographic Institute, the National Science Foundation and the University of Rhode Island — who worked with NTSB investigators and support staff over three missions in 10 months to make this successful recovery possible.”

The Military Sealift Command tug USNS Apache departed Virginia Beach, Virginia, Friday with personnel from the NTSB, the U.S. Coast Guard, the U.S. Navy and Phoenix International aboard. After arriving at the accident location on Monday morning, technicians maneuvered CURV-21, a deep ocean remotely operated underwater vehicle, down about 15,000 feet to the sea floor where the wreckage of El Faro rests.

Specialized tools were used to extricate the VDR capsule from the mast structure to which it was attached. The capsule was recovered to the deck of the ocean tug at about 10:30 pm Monday evening.

The voyage data recorder will be examined while at sea by NTSB investigators aboard the USNS Apache, to assess its condition and to ensure proper preservation for readout and further examination ashore.

The VDR will be transported to the NTSB’s laboratory in Washingtom, DC after the Apache returns from sea on about Aug. 12, 2016.

Once at the NTSB’s lab a team of specialists will audition the recording. It is not yet known how long it may take to review the data and audio information that may be captured on El Faro’s VDR. While the minimum design requirement for VDRs of this type is for 12 hours of recording, it may contain additional information — reviewing which is a thorough and time consuming undertaking.

NTSB says it will provide updates as investigators learn more about the condition and contents of the El Faro’s VDR.

While investigators examine the VDR, additional photo- and video-documentation of the El Faro wreckage and debris field will be completed today concluding NTSB’s activities at the site. No further missions to the accident site are planned unless warranted as the investigation continues.