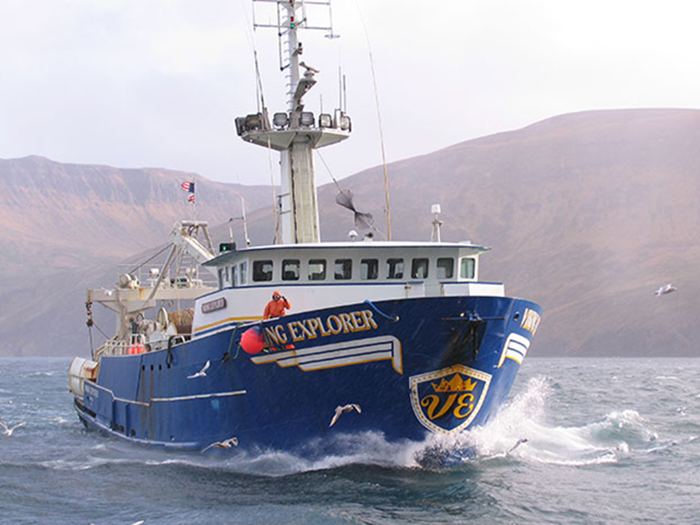 Viking Explorer is one of 15 Trident trawl catcher-vessels operating in the Bering Sea and Aleutian Islands region of Alaska. Trident and its subsidiaries own and operate four factory processor vessels, one freighter vessel, and nearly 30 catcher and tender vessels

Seattle based fisheries giant Trident Seafoods Corporation has agreed to reduce emissions of ozone-depleting substances from refrigeration equipment on its vessels, under a proposed settlement with the U.S. Environmental Protection Agency and U.S. Department of Justice to resolve alleged violations of the Clean Air Act.

Under the settlement, Trident will spend up to $23 million to reduce coolant leaks from refrigerators and other equipment, use alternative refrigerants, and improve company-wide compliance. The company will also pay a $900,000 civil penalty.

Trident and its subsidiaries Royal Viking Inc and Golden Dawn LLC own and operate four factory processor vessels, one freighter vessel, nearly 30 catcher and tender vessels, and 10 land-based facilities in Alaska and the Pacific Northwest. In most of these vessels and facilities, according to EPA, Trident uses ozone-depleting HCFCs in its refrigeration appliances in sizes ranging from less than 50 pounds of refrigerant to greater than 5,000 pounds of refrigerant.

“As a result of today’s settlement, Trident Seafoods will implement common-sense methods to reduce releases of ozone depleting refrigerants into the atmosphere,” said EPA Pacific Northwest Regional Administrator Chris Hladick. “With millions of pounds of refrigerants still in circulation in the U.S., it’s imperative that companies properly maintain and repair their appliances to ensure these don’t leak out and harm the ozone layer.”

EPA alleged that Trident violated the Clean Air Act by failing to promptly repair leaks of the refrigerant R-22, an ozone-depleting hydrochlorofluorocarbon (HCFC). EPA says that Trident’s failures allowed its appliances to leak refrigerant at high rates for thousands of days, causing over 200,000 pounds of harmful refrigerant to be released into the atmosphere.

Trident will retrofit or retire 23 refrigeration appliances used on 14 marine vessels to use an alternative refrigerant that does not harm the ozone layer compared to typical refrigerants. Trident agreed to retrofit nine of these appliances as part of a Supplemental Environmental Project. According to EPA, because of these retrofits, nearly 100,000 pounds of harmful refrigerant will be removed from use, and future leaks will not damage the ozone layer.

As part of the settlement, Trident will also conduct routine leak inspections of all appliances, promptly repair leaks, install leak detectors to monitor appliances for leaks, add fluorescent dye into appliances to assist staff in detecting leaks, compile information to assist in identifying common failure points on appliances, and train employees to properly manage the appliances.

In addition, the settlement sets a corporate-wide refrigerant leak cap and requires Trident to retain a third-party auditor to review the company’s compliance with the consent decree and regulations.

The total estimated emission reductions from this settlement are equal to the amount from over 143,000 passenger vehicles driven in one year, the CO2 emissions from 734 million pounds of coal burned, or the carbon sequestered by over 790,000 acres of forests in one year.

The Clean Air Act’s National Recycling and Emission Reduction Program governs the management of ozone-depleting substances and implements the United States’ mandates under the 1991 Montreal Protocol on Substances that Deplete the Ozone Layer. EPA regulations require that owners or operators of industrial refrigeration equipment that contains over 50 pounds of ozone-depleting refrigerants repair leaks within 30 days, verify and document leak repairs and servicing. The regulations also prohibit appliances from being opened by people other than specially trained certified technicians and require the use of certified refrigerant recovery devices when appliances are opened.

Between 2009 and 2016, says EPA, Trident violated these regulations on numerous occasions. In addition to its failures to repair leaking appliances, Trident also failed to create adequate servicing and compliance records on at least 289 occasions. Trident also, at times, used uncertified technicians to perform work on refrigerant equipment and used inadequate refrigerant recovery equipment.

The proposed settlement was lodged in the U.S. District Court for Alaska on February 15 and is subject to a 30-day public comment period and court approval. View the settlement HERE