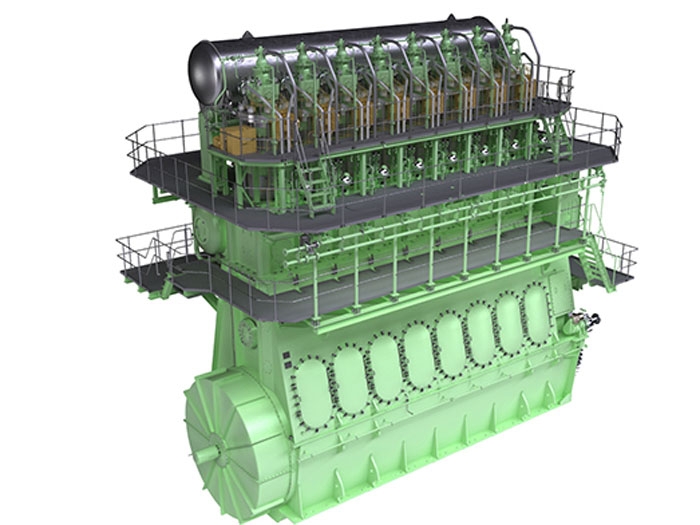 Graphical rendering of a two-stroke, dual-fuel MAN B&W 8L70ME-GI engine. The ME-GI is capable of running on both HFO and gas – predominantly natural gas but also LPG and methane. MAN Diesel & Turbo reports a strong market reception to the engine

“We are ready for IMO Tier III,” said Dr. Stephan Timmermann, MAN Diesel & Turbo Executive Board Member responsible for Marine Systems and After Sales. “We have the technologies in place to support our customers for this new era of environmentally efficient shipping. I am pleased that the adoption of the IMO regulations will save us from mushrooming national regulations. Now we have a clear set of rules.”

“Exhaust Gas Recirculation (EGR) and Selective Catalytic Reduction (SCR) are technologies we not only have available but have operational experience with,” said the company’s Chief Technology Officer, Dr. Hans-O. Jeske.

The Danish vessel Petunia Seaways is equipped with an MAN SCR system that has reliably operated for 9,000 hours to date and follows the world’s first Tier-III-compliant, two-stroke engine that was built by Hitachi Zosen Corporation in Japan for a general cargo carrier in 2011.

Similarly, the company received its first commercial order for an EGR system, to be applied aboard a 4,500 TEU Maersk Line container newbuilding, in 2012. The system will be fully integrated with the vessel’s main two-stroke engine, to be built by Hyundai Heavy Industries’ engine & machinery division.

MAN Diesel & Turbo has also met the Tier III challenge by introducing dual-fuel engines that can operate on clean-burning gas. The two-stroke, high-pressure ME-GI and four-stroke, 51/60DF engines were introduced in 2013 and 2012 respectively and give shipowners and operators the option of using either HFO or gas, depending on emission and price parameters.

Experts across all disciplines at MAN reckon that emissions regulation will remain a key driver for maritime technology development.

“For MAN Diesel & Turbo, it is important to offer a variety of solutions so that customers can best balance their needs in terms of cost efficiency, environmental efficiency and operational profile,” said Dr. Jeske. “For decades to come, we will see a rivalry of fuels. Versatility will be key. This is why we offer highly efficient, dual-fuel, two- and four-stroke engines, emission-control equipment and highly developed propeller designs.”

“While fuel prices remain high and emissions controls become ever more stringent, shipowners look for the most efficient solutions for newbuildings and existing ships,” said Ole Grøne, Senior Vice President Marketing & Sales, for MAN’s Low-Speed business unit. “From an environmental point of view, low-sulfur fuels such as methane, natural gas and LNG are highly relevant – all the more reason for us to be pleased with the success of our ME-GI engines.”

While IMO Tier III will come into force for newbuildings from 2016 onwards, already today retrofits can significantly enhance fuel efficiency for existing fleets.