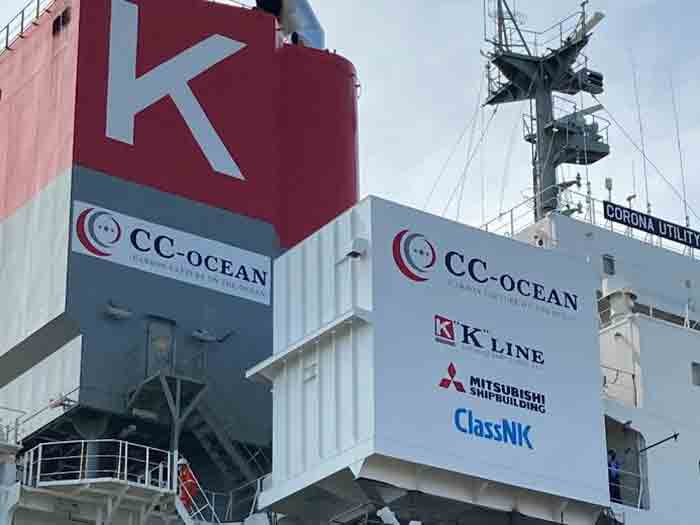 The first vessel to be installed with a CO2 capture plant to lower GHG emissions from its propulsion plant is a Japanese coal carrier, the Corona Utility, operated by Kawasaki Kisen Kaisha Ltd. (K Line) for Tohoku Electric Power Co. Inc.

While there’s some irony in using a carbon capture plant to deal with vessel emissions from a ship carrying coal, it should be noted that Tohoku Electric is making major efforts to lessen its reliance on coal and to produce more of its power from renewables.

The installation on the Corona Utility is the latest step in a project backed by the Maritime Bureau of Japan’s Ministry of Land, Infrastructure, Transport and Tourism that was announced last year. K Line’s partners in the project are Mitsubishi Shipbuilding and ClassNK.

The pilot small carbon capture plant was installed following a Hazard Identification Study (HAZID) conducted by Class NK to verify the safety of the operation.

After departure of the vessel from the MHI Yokohama shipyard, experts from Mitsubishi Shipbuilding will remain on board for one voyage to commission the small CO2 capture plant, evaluate its operational performance at sea, and analyze the captured CO2.

After that, until the end of FY 2021, the ship’s crew will evaluate the operation, safety and operability of the plant, and will conduct demonstration tests in order to prepare for its commercialization by Mitsubishi Shipbuilding. This will include downsizing it in size and weight and optimizing the efficiency of the CO2 capture system.