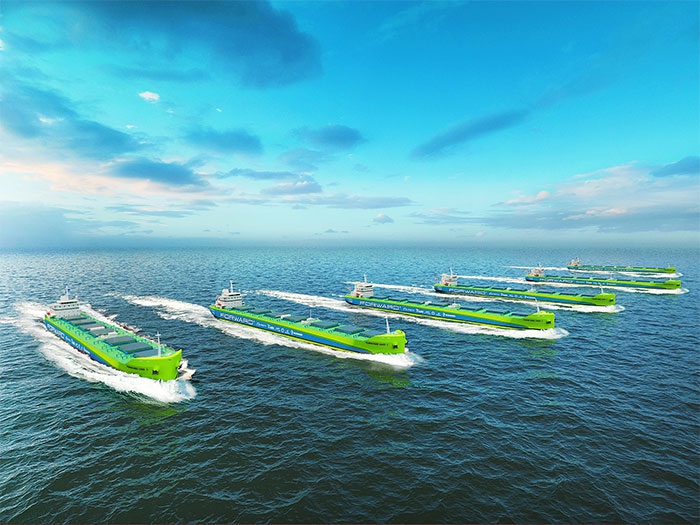 OCTOBER 18, 2018 — Cut shipping CO2 emissions by 40% by 2030? That’s an IMO target that can be met, according to the participants in the Project Forward initiative led by Athens-Based Arista Shipping. They say that the project demonstrates that with LNG as fuel, an advanced hull design and highly efficient propulsion machinery, it will be possible to meet the IMO goal. And, with further measures, even greater carbon reductions are possible.

Model tests of the Project Forward concept vessel indicate that the Energy Efficiency Design Index (EEDI) is well below the currently most stringent Phase III level. The EEDI reflects the CO2 emissions per transport work and is a measure of carbon intensity. EEDI Phase III is applicable to ships built after 2025 and signifies a 30 percent reduction from the 2008 reference level.

IMO has also called for efforts to be made for a possible further reduction in CO2 emissions of up to 70 percent by 2050. One commonly discussed way to reduce such emissions would be to limit the propulsion engine power, but this would require a significantly lower service speed, resulting in a serious impact on the chain of logistics.

Project Forward shows that this 70 percent reduction in CO2 emissions target can be met, even without lowering service speeds, through the use of carbon neutral fuels mixed with LNG. Such carbon neutral fuels can be transported, stored, and consumed in a similar way to that of fossil LNG.

“Through the advanced engine technology available today, LNG has a clearly superior well-to-wake emissions profile compared to liquid fuel. LNG appears not as a transition fuel, but the fuel of tomorrow and for many years to come,” says Antonis Trakakis, Technical Director at Arista Shipping.

The concept vessel’s hull form has been optimized in cooperation with Finnish ship designer Deltamarin and classification society American Bureau of Shipping (ABS).

“Deltamarin has a long history in energy-efficient ship designs where hull form development has always been one of the spearheads”, says Tommi Hietamäki, Project Engineer at Deltamarin.

“As a global leader in gas, ABS is collaborating with innovative companies and organisations to support the delivery of technologies that minimize the environmental impact of shipping,” says Elias Kariambas, ABS Regional Business Director, Greece. “The Project Forward vision to create an efficient, environmentally-protective long-haul bulk carrier is perfectly consistent with the ABS mission, and we are proud to contribute to the joint effort.”