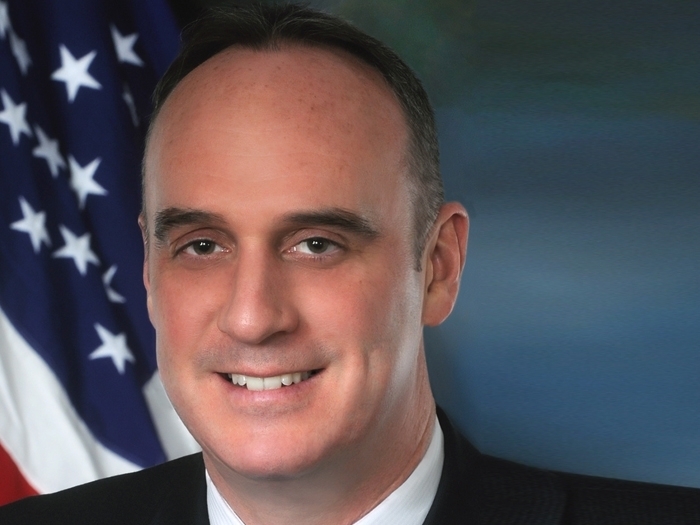 SEPTEMBER 4, 2014 — If anyone had any doubts about the ongoing availability of LNG as a marine fuel, Federal Maritime Commissioner William P. Doyle laid them to rest today, noting that the U.S. is now the world’s largest supplier of natural gas, with an estimated 100 year supply — creating “plenty of space for the maritime industry to utilize liquefied natural gas as a marine fuel.”

Commissioner Doyle led the LNG track at today’s Marine Log All About Marine Conference and Expo. Following is the text of his prepared remarks:

What a great forum we have here today hosted by Marine Log. This is what it’s all about—the “All About Marine Conference and Expo”—America at its best—talking about manufacturing ships, job creation and preservation, and environmental stewardship. There are four separate tracks going on right now—LNG, Jones Act, Shipyards and Environmental. I am opening the LNG track, and we all know, when discussing LNG in the U.S. maritime sector, we touch on all of the above—fuel, Jones Act, shipyards and the environment. I will be addressing LNG as a Marine Fuel.

Natural Gas Supply in the United States
The United States is now the world’s largest producer of natural gas. Highlighting shale basins such as the Marcellus, Utica and Barnett, the Energy Information Administration and the Potential Gas Committee have estimated that there is a 100 year supply of natural gas. Thus, it appears there is plenty of space for the maritime industry to utilize liquefied natural gas as a marine fuel.

MARPOL Annex VI is an agreement covering pollution from ships and developed through the International Maritime Organization (IMO), a United Nations agency, which has resulted in emission control areas. Effective January 1, 2015, the maximum sulfur (SOx) content in bunker fuel permitted inside emission control area (ECA) zones of the US, North Europe and the Baltic Sea will be reduced from 1 percent to 0.1 percent. When transiting ECAs, ship operators will be required to switch to a more expensive distillate fuel (i.e., marine gas oil (MGO)) or install relatively expensive exhaust filters, known as scrubbers. LNG is also an option. However, in June, the International Energy Agency said that scrubbers and LNG cannot easily be deployed by January 2015. This is not stopping some owners and operators in the U.S.-flag domestic fleet from taking advantage of LNG for its fueling needs.

For waters outside the ECAs, effective 2020, sulfur content in marine fuels will be cut to 0.5 percent. There will be, however, a feasibility review on the practicalities of reaching the 0.5 percent benchmark, scheduled for completion no later than 2018. Based on this review, a group of experts from the IMO’s Marine Environment Protection Committee will decide whether it is feasible for ships to comply with the 2020 date, or if the emissions standard should be deferred until January 1, 2025.

On the international front, ship owners are taking the requirements of MARPOL Annex VI very seriously. On July 7, 2014, a group of eleven international carriers announced the formation of the Trident Alliance. According to Wallenius Wilhelmsen Logistics (WWL), one of the member companies, the Trident Alliance is a coalition of ship owners and operators who share a common interest in robust enforcement of maritime sulfur regulation and are willing to collaborate to help bring it about. WWL’s VP of Environmental stated: Robust enforcement of sulfur regulation is needed for health and the environment and, from the perspective of maintaining a level playing field, it is a business imperative. Already during its formation the Trident Alliance has raised awareness of the current shortcomings of enforcement and related consequences, particularly in the European ECA.

The U.S. is also taking ANNEX VI very seriously. For the North American Emissions Control Area (ECA), the US Coast Guard (USCG) and Environmental Protection Agency (EPA) have examined records and documents such as bunker delivery receipts during their port state control inspections. According to the UK P&I Club, authorities in the U.S. have boarded vessels to collect bunker samples and are experimenting with vessel flyovers to test smokestack plumes. In another sign of more rigorous enforcement, it is reported that authorities have also issued administrative subpoenas to several large ship operators.

Driving Factors for LNG as a Marine Fuel

There are two primary factors that experts evaluate when considering the use of LNG as a marine fuel:

LNG is expected to be less costly than marine gas oil which will be required to be used within the ECAs if no other technical measures (scrubbers) are implemented to reduce SOx emissions. Based on current forecasts, natural gas delivered for production of LNG in the U.S. is now more than 50 percent less expensive on an energy-equivalent basis than marine residual fuel and marine distillate fuel. It is projected that this relative price advantage will continue. We know that MGO is currently running about $300 per ton more than heavy fuel oil (HFO) and the International Chamber of Shipping has estimated that it will increase the industry’s total fuel bill by $50 billion per year.

The use of LNG as a marine fuel allows for a significant reduction in sulfur oxide (SOx) and nitrogen Oxide (NOx) emissions. LNG reduces SOx emissions by between 90 percent and 99 percent; and NOx emissions by upwards of 90 percent. SOx is known to cause acid rain and NOx is known to be a cause of smog. LNG also has a lower carbon content than traditional bunker fuels, giving off up to 25 percent less CO2 emissions.

LNG as a Marine Fuel is Rapidly becoming a Reality in the U.S.

The major challenges for wide acceptance of LNG as a marine fuel are linked to LNG logistics and infrastructure. There needs to be accessible LNG bunkering options – whether shore side or through barge operations. In addition, a larger LNG fuel tank is required to travel the same distance as a diesel fueled ship. This means there is a reduced amount of space available for commercial cargo or passengers.

That said, the U.S. is moving forward with construction of offshore supply-vessels, ocean-going LNG fueled ships and bunkering operations.

Last year, the gates began to open for LNG as marine fuel. New Orleans-based Harvey Gulf International Marine announced it would be building six U.S.-flag offshore vessels (OSV), to be operated primarily on U.S.-flag natural gas. Harvey Gulf estimated that the use of LNG would potentially save as much as $2.4 million per ship per year on fuel costs alone.

To keep things moving along, it was announced last week that Wärtsilä signed a five-year technical management agreement with Harvey Gulf covering maintenance of the six LNG fueled platform supply vessels. I want to acknowledge John Hatley of Wärtsilä who is a tireless advocate of LNG as a marine fuel.

In February, General Dynamics NASSCO shipyard in San Diego, California held a ceremony marking the first cut of steel for the construction of Totem Ocean Trailer Express’ (TOTE’s) new Marlin Class container ship. TOTE expects to build two of these LNG powered vessels and homeport them in Jacksonville, Florida and operate them in the U.S. mainland to Puerto Rico trade. TOTE is also currently in the process of converting its two roll on/roll off (Ro/Ro) vessels to mostly LNG operation. These vessels operate in the Tacoma, Washington to Anchorage, Alaska trade. TOTE’s president and CEO, Anthony Chiarello is participating in this conference.

On the East Coast, Aker Philadelphia Shipyard is building eight LNG ready product tankers and two LNG ready container ships. This summer the formation of Philly Tankers AS was announced. Philly Tankers will own two eco-design product tanker newbuilds (LNG ready) expected to be delivered in the first quarter of 2017.

LNG Terminals in the U.S. and Synergies with LNG Bunkering

Over the past few years much attention has been paid to the export of LNG from North America. In the United States, LNG import facilities are now adding liquefaction and other associated machinery and equipment for loading of LNG tankers for export. Clearly, and if possible, using some of our domestically produced natural gas (which is aimed for export) for the domestic maritime fleet would be considered good stewardship of this national and natural resource.

The LNG America Company is latching on to the concept of using an LNG export facility as a supplier on LNG for bunkering operations. LNG America is working with Cheniere Energy to secure LNG from the Sabine Pass LNG export facility currently under construction in Cameron Parish, Louisiana. Two weeks ago the company announced that it selected Taylor-Wharton to commence the front-end engineering (FEED) and design work for the cryogenic topside of the company’s 3,000 cubic meter Gemini Class LNG bunker barge scheduled for delivery at the end of 2015. Earlier this year LNG America announced the selection of Jensen Maritime as the naval architect for the project and the American Bureau of Shipping (ABS) as the class society. This is moving along quickly.

The federal government is doing a good job with respect to the development of LNG as a marine fuel. The U.S. Coast Guard is seeking private sector input on draft guidance for LNG bunkering operations. The draft guidance is not a regulation. Industry participation is a must.

The United States Department of Transportation’s Maritime Administration (MARAD) released the results of the study last week that showed that the use of natural gas as a propulsion fuel can reduce air quality pollutants and reduce major greenhouse gas emissions when compared to conventional fuels. The research was conducted through a cooperative partnership with the Maritime Administration, the University of Delaware and The Rochester Institute of Technology. In addition, MARAD is sponsoring a program for two projects supporting the increased use of LNG fuel and technology in the maritime industry. One project is a public-private partnership between the Maritime Administration and U.S. flagged carrier Horizon Lines for the conversion and monitoring of one of its vessels to operate on LNG fuel. The second project includes a study being conducted by the U.S. subsidiary of Det Norske Veritas Inc. (DNV) to analyze the issues and challenges associated with bunkering of LNG powered vessels.

Coordination with regulators is important. TOTE states that its vessel conversion program for the RO/ROs is the product of a successful public-private partnership among TOTE, the U.S. Environmental Protection Agency, and the U.S. Coast Guard. We can all learn by TOTE’s example on how to cooperate and work with regulators.

I have highlighted a sampling some of the projects that are moving forward in the United States. There are more. Natural gas is an affordable and domestically abundant fuel of source in America. Its abundance is credited with substantial job creation and preservation of jobs in the maritime industry. And LNG provides users with a means to meet international shipboard emission control requirements while saving on fuel costs. The LNG marine fuel/bunkering sector is growing in North America. There appears to be many opportunities available for those looking to operate LNG fueled vessels and/or enter into the LNG bunkering and fueling sectors. I look forward to the continued expansion of LNG into our economy.

William P. Doyle is a Commissioner with the U.S. Federal Maritime Commission, which among other things regulates liner companies, shippers and marine terminal operators, all of whom are affected by the implementation of emission control areas. The thoughts and comments he expresses here are his own and should not be construed to represent the position of the Commission or his fellow Commissioners. 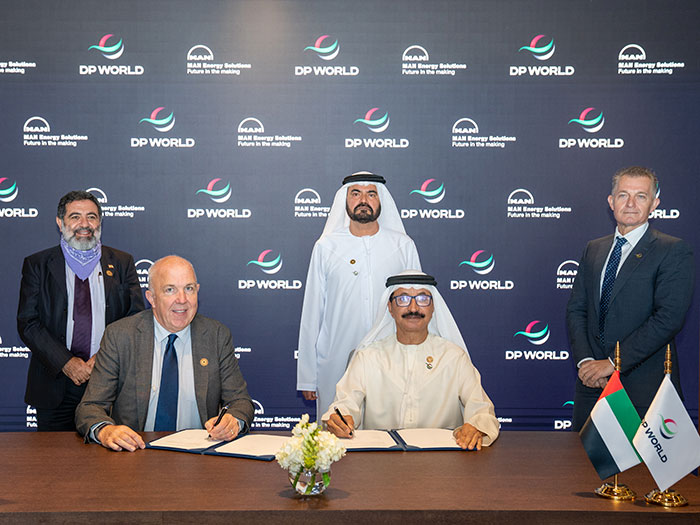 MAN and DP World to cooperate on decarbonization 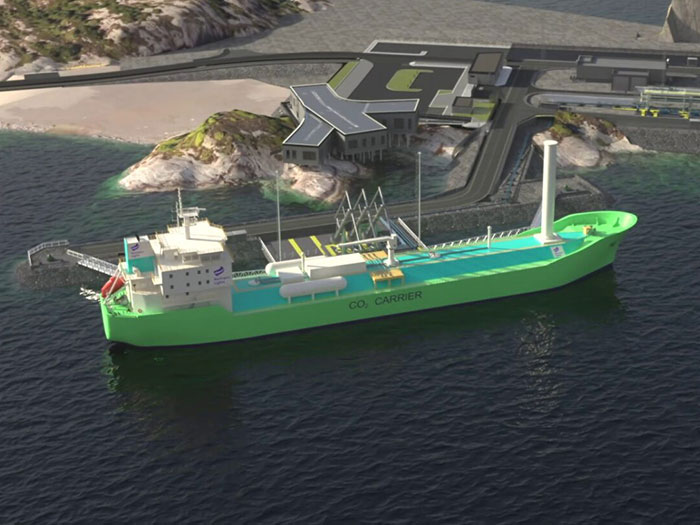