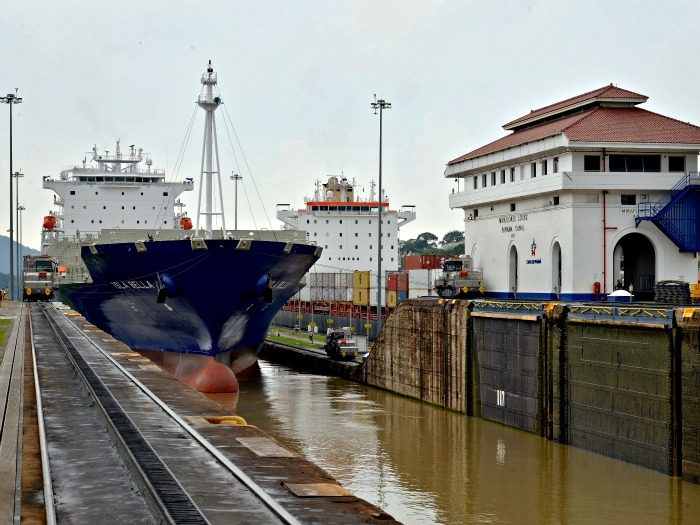 The Isla Bella transiting the locks at Mia Flores

NOVEMBER 4, 2015—The Isla Bella, the world’s first LNG-powered container vessel, transited through the Panama Canal on October 30. The transit by the Isla Bella marks a milestone for the maritime industry and the Panama Canal as it nears the completion of its expansion set to open in 2016.

The 764-ft Isla Bella is equipped with the world’s first dual-fuel slow-speed engine, an 8L70ME-GI built by Korea’s Doosan Engine, under license from MAN Diesel & Turbo. With a 3,100 TEU capacity, the LNG-powered Isla Bella reduces NOx emissions by 98 percent, SOx emissions by 97 percent and CO2 emissions by 76 percent.

“The Isla Bella is a true engineering feat,” says Panama Canal Administrator/CEO Jorge L. Quijano. “We are honored that this vessel, with its unique technology, transited the Canal.”

The Isla Bella is the first of two Marlin Class container ships contracted by TOTE Maritime and built by General Dynamics NASSCO in partnership with the American Bureau of Shipping and the U.S. Coast Guard.

The Isla Bella is scheduled to begin providing freight service in the fourth quarter of 2015 between Jacksonville, FL and San Juan, PR. The Perla del Caribe, the second Marlin Class containership, was launched this past August and will enter service in the first quarter of 2016. Once Perla del Caribe is completed, the boxships will be the largest and most environmentally friendly LNG-powered dry cargo ships in the world.