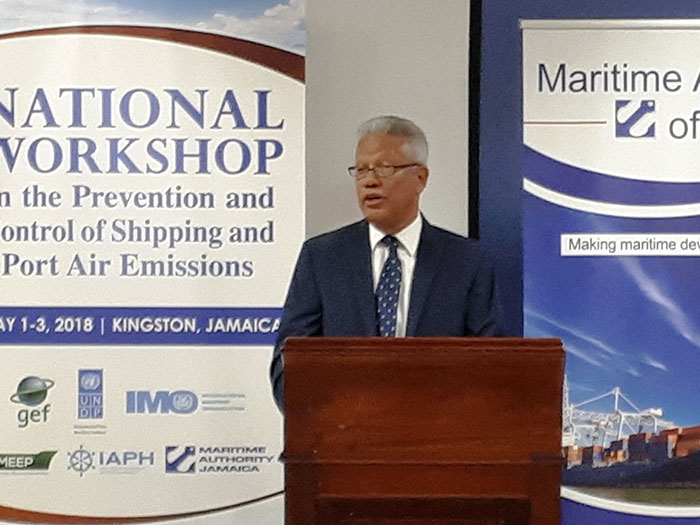 JUNE 5, 2018 — Cutting greenhouse gas emissions from shipping and port operations were in sharp focus at a recent workshop hosted by the Maritime Authority of Jamaica (MAJ) as part of Jamaica’s activities as one of 10 Lead Pilot Countries and the only country in the Caribbean selected to participate in the GloMEEP Project.

The project supports countries where there is a concentration of shipping whether as port or flag state to implement the energy efficiency measures in chapter 4 of the MARPOL Convention. Jamaica has one of the largest trans-shipment ports in the Caribbean and the opening of the expanded Panama Canal in 2016 has transformed maritime transport in the country with significant increases in ship sizes transiting its waters and calling at the trans-shipment port in Kingston currently operated by CMA CGM though Kingston Freeport Terminal Limited.

Officially opening the workshop, Rear Admiral (Ret’d) Peter Brady, MAJ Director General, said, “This national workshop is a landmark event – not just in terms of the International Maritime Organization’s (IMO) work, but also more significantly in the journey of shipping and its related industries towards a low-carbon future.”

Material from the workshop will be used to form policies and programs and Jamaica, as a Lead Pilot Country, will transfer this knowledge throughout the Caribbean and other Small Island Developing States.

The workshop was attended by representatives from the Port Authority of Jamaica, the Shipping Association of Jamaica, Ministry of Economic Growth and Job Creation, National Environment Planning Association, Ministry of Transport and Mining, Maritime Authority of Jamaica, Kingston Freeport Terminal Limited, Kingston Wharves Limited, Air Quality Consultants Limited, University of Technology Jamaica, University of the West Indies and the Caribbean Maritime University. The primary objective of the workshop was to assist the ports to assess emissions from cargo handling equipment and to develop strategies to reduce the emissions.

“The workshop has served to create an acute awareness among many partners in the maritime industry in Jamaica and particularly among persons engaged in diverse activities in our ports. Before this, our thoughts were concentrated more on emissions from ships only, and now we are more sensitized to the contribution to GHGs by activities in the ports, including cargo handling equipment such as forklifts, container cranes and straddle carriers,” said Admiral Brady.