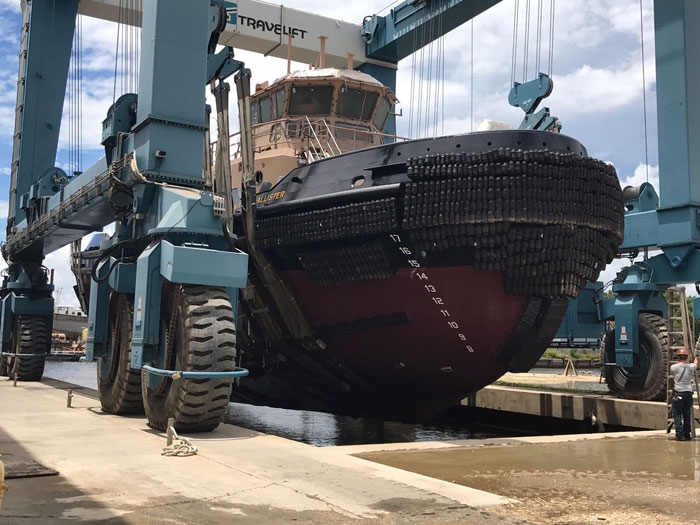 JULY 19, 2017—While much of the media attention at Horizon Shipbuilding Inc., has focused on its construction of a series of passenger-only ferries for NYC Ferry, it is also building for another New York City customer. The Bayou La Batre, AL, shipbuilder recently launched the Rosemary McAllister, the second in a series of two Azimuth Stern Drive (ASD) escort/rescue tugs for McAllister Towing & Transportation, New York, NY.

Designed by Jensen Maritime, Seattle, WA, the tug will provide enhanced ship docking as well as direct and indirect escorting for new post-Panamax and ultra-large vessels operating to the U.S. East Coast.

The tug’s towing machinery includes a Markey asymmetric render-recover winch on the bow and a Markey tow winch with a spool capacity of 2,500 ft of 2-¼ in wire on the stern.

Horizon Shipbuilding has also been contracted to build a third tug for McAllister Towing, as well as an 88-foot-long bunker barge for an undisclosed client, and a 60-foot-long landing barge for Sunset Key, FL. It is also continuing production on passenger-only ferries for NYC Ferry.