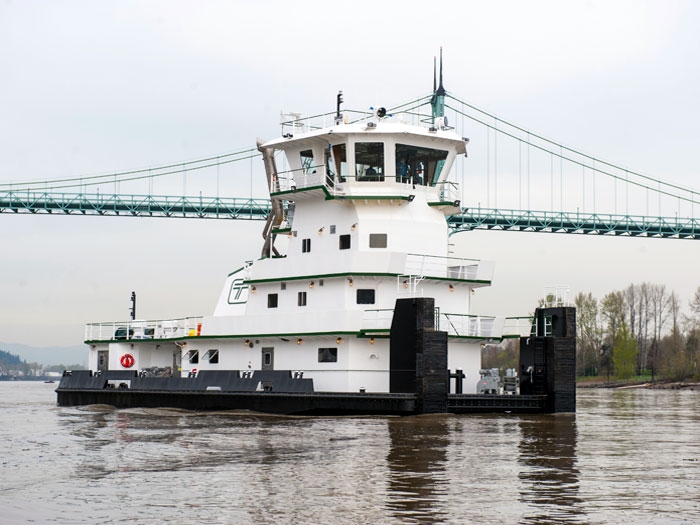 APRIL 20, 2015—Tidewater Transportation and Terminals, headquartered in Vancouver, WA, recently took delivery of the Crown Point, the first in a series of three 102 ft x 38 ft towboats being built at Vigor Industrial in Portland, OR.

The three towboats are the first new vessels to be built for the Tidewater fleet in 30 years, and are critical for the company to meet the anticipated rising customer demand on the Columbia-Snake River system. “The launching of the Crown Point, and the forthcoming Granite Point and Ryan Point vessels, marks an important step for Tidewater,” says Marc Schwartz, Maintenance & Engineering Manager at Tidewater. The vessels will strengthen our fleet, as well as reinforce Tidewater’s commitment to our customers, community, and environment.”

Headquartered in Vancouver, WA, Tidewater operates the largest barge transportation and terminal network on the Columbia-Snake River system. The Crown Point joins the company’s current fleet of 16 vessels and 160 barges. Tidewater transports a wide range of cargo among a network of ports, terminals and grain elevators throughout the entire Columbia-Snake River system, which stretches some 465 miles of waterways. We also operate five strategically located terminals and five pipelines with key intermodal connections to railroads, highways and other pipelines.

Designed by CT Marine, Naval Architects and Marine Engineers of Edgecomb, ME, the Crown Point is an environmentally friendly tug with EPA Tier 3 compliant diesel engines that reduce air emissions and improve fuel efficiency. Main propulsion is supplied by two Caterpillar 3516C EPA Tier 3 certified diesel engines producing 2,240 bhp, each at 1,600 rev/min. The engines drive two 92 in. x 100 in. fixed pitch, stainless steel propellers through CT28 Kort Nozzles capable of a service speed of 8 knots. Operating in the Columbia River Gorge high winds, extreme currents and swells can be considered normal piloting conditions. That’s why the Crown Pount abd her sister towboats are fitted with an enhanced steering system using four steering and four flanking rudders was designed. The towboat has a wheelhouse with exceptional all-round visibility through full height windows, leading edge navigation and communications equipment, and enhanced accommodations for the captain and crew.

“During the last year and a half, a great deal of effort went into designing, engineering and building a towboat that would meet or exceed performance parameters,” explains Bruce Reed, Tidewater COO and Vice President. “With crew endurance being a priority, we employed Noise Control Engineers, Billerica, MA to develop a sound and vibration control package for the vessel. By incorporating Christie and Grey vibration control mounts and comprehensive acoustic insulation, noise levels register at less than 60 decibels in the accommodations during vessel operation.”

Larry Bartel, who has been a Tidewater Captain since 1981, was one of two Captains who piloted the Crown Point through her sea trials. “Not only is it the quietest tug I have ever piloted, but it has tremendous rudder power so it can turn around a loaded tow precisely and swiftly,” says Bartel.

“The delivery of the Crown Point represents the conclusion of a successful project that has further diversified Vigor’s new build portfolio,” explains Bryan Nichols, Director of Sales at Vigor Fab. “It has been an honor to partner with Tidewater on this project and to shine a light on the fact that great vessels are being built right here in the Pacific Northwest. We are proud of the Crown Point and are confident that she will serve their company and their customers for decades to come.”

The christening ceremony for the Crown Point is scheduled in June.

In order to use the newest technology and minimize power usage, variable frequency drives were used in all major rotating machinery applications and LED lighting was employed in both interior and exterior lighting applications. The vessel is fitted with a Kidde NOVEC 1230 fire suppression system. Centralized fire detection and alarms cover both the machinery spaces and accommodations.