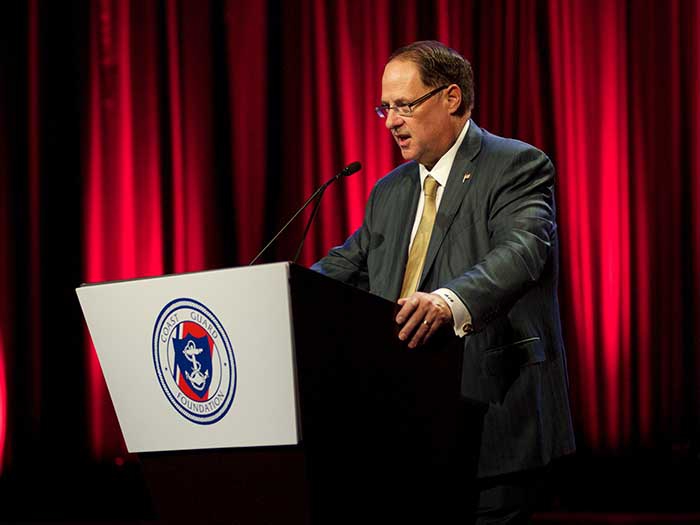 Mr. Bouchard has been a proud supporter of the United States Coast Guard and the Coast Guard Foundation since 1985. Through his dedication over the past 30 plus years he has helped grow various programs including, education and the Fallen Heroes Scholarship program, support for USCG members both ashore and at sea, and relief for USCG members and their families during times of critical injury, or worse.

Mr. Bouchard was introduced to the gathering by Coast Guard Foundation Chairman and American Bureau of Shipping (ABS) Director, Will Jenkins.

Mr. Bouchard said he proudly accepted the honor on behalf of Bouchard’s employees, “who everyday go above and beyond, 365 days a year, to provide safe transportation of the various petroleum products on the coastal waters of the United States.”

He followed his acceptance with thanks to Coast Guard commandant Admiral Paul Zukunft, the evening’s guests — whose contributions helped make the night a record breaking success, and the men and women of the United States Coast Guard.

Mr.Bouchard concluded with a proposal to form a committee with the cooperation of fellow industry owners and operators, the USCG, AWO and ABS, with a goal to bind the entities together and work to provide ongoing industry support for the United States Coast Guard.

Bouchard Transportation Co., Inc.’s history dates back to its incorporation in 1918 by founder, Capt. Fred Bouchard, the youngest tugboat captain in the Port of New York. Bouchard is a family owned business and the nation’s largest independently-owned ocean-going petroleum barge company. The company’s areas of operation span throughout the United States, Canada and the Caribbean. The fleet consists of 26 barges, ranging from 35,000 to 260,000 barrels, and 25 tugs, ranging from 3,000 to 10,000 horsepower.