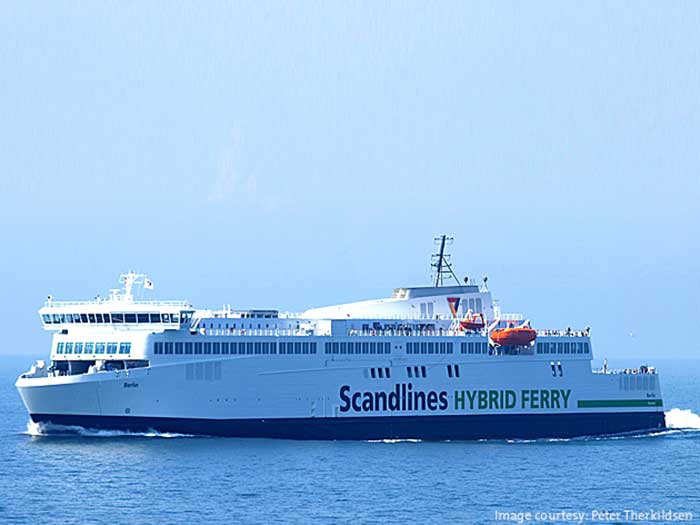 AUGUST 15, 2016 —MF Berlin, the first of two new battery-hybrid passenger and freight ferries is now in service on Scandlines’ Gedser-Rostock route between Denmark and Germany. Sister vessel MF Copenhagen is set to follow her into service on delivery from Denmark’s Fayard shipyard later this year.

Each ferry can carry 1,300 passengers  and the equivalent of 460 cars or 96 trucks. Both were designed specifically for the route and feature a centerline CP Promas propeller/rudder and two wing Azipull thrusters.

The vessel length of 169.5 m and draft of 5.5 m are optimized for Gedser harbor at the Danish end of the route, and the design of the hull has taken into account the shallow water on the entire 26 nautical mile run. Within Gedser harbor the water depth is only about 7.5 m, and the depth varies between 14 and 21 m over the rest of the route.

Another complicating factor is the strong across current at the opening between the piers at Gedser.The operating strategy is therefore to accelerate rapidly to 9 knots astern when leaving Gedser, then turn the vessel once outside the port, proceed to Rostock, and turn again before entering berth stern first.

On the return trip the ferries will go ahead from berth to berth.

As part of the investment the ferry piers and ramps have been rebuilt at both terminals to reduce turnaround times. This enables transit speeds that give optimum fuel economy can be adopted for the given departure frequency, which is 20 departures per day in a fixed two-hour cycle, translating into around 19 knots for a 105 minute passage time.

This way of operating puts the focus on maneuverability and speed.

The Rolls-Royce propulsion solution includes two wing Azipull azimuth thrusters that are in operation at all stages of the voyage, each driven by a 3,500kW electric motor.

They enable large turning forces to be exerted on the vessel, whether it is stationary or moving. When reversing off the berth and out between the harbor piers at Gedser and dealing with the cross currents, the Azipulls are rotated for full astern thrust to give precise course keeping and will accelerate the ferry from standstill to 9 knots in less than three shipl engths.

In transit, the thrusters deliver efficient forward thrust. For maneuvering and at lower speeds the centerline CP propeller is feathered. Once the ferry’s speed reaches 17 knots the propeller is set to the freewheeling pitch and clutched in. The center shaftline then supplies the additional propulsion thrust needed for full transit speed, driven through a combining reduction gearbox.

Two generator sets, two main engines and a battery pack provide a total of 18 MW to the propellers and to meet hotel load.

The Helicon X3 control system adjusts propeller pitch and speed, and determines the power fed to the azimuth thrusters, to give the optimum power split of 40 per cent of the total equally divided between thrusters, and 60 per cent to the centerline controllable pitch propeller.

To maximize propulsive efficiency and reduce cavitation induced pressure pulses the Promas system has a five bladed propeller. The rudder with a Costa bulb and a twisted leading edge recovers swirl energy in the propeller slipstream that would otherwise be lost, converting it into additional forward thrust. The Promas is also a low drag solution in the feathered position, and the five bladed monoblock propellers on the Azipull units are designed to provide high propulsive efficiency up to 17.5 knots.

This innovative solution was designed after extensive mathematical modeling, and test tank work.

Small underkeel clearance can give rise to propeller wear or damage. To minimize this the thrusters are positioned close up under the hull, the CP propeller diameter is limited to 4.6 m, and the bottom of the hull is dished to give more clearance over the propeller.

As the ships run at speed in shallow waters, cavitation and pressure pulses were analyzed in detail to ensure they met passenger vessel noise criteria.

Environmentally friendly power for propulsion and hotel load is provided by four diesel engines with combined scrubbers, one less than a non-hybrid design, integrated with a 1.5 MWh energy storage system of lithium polymer batteries.

These new ferries now join the Scandlines fleet, which is the largest fleet of hybrid ferries in the world.