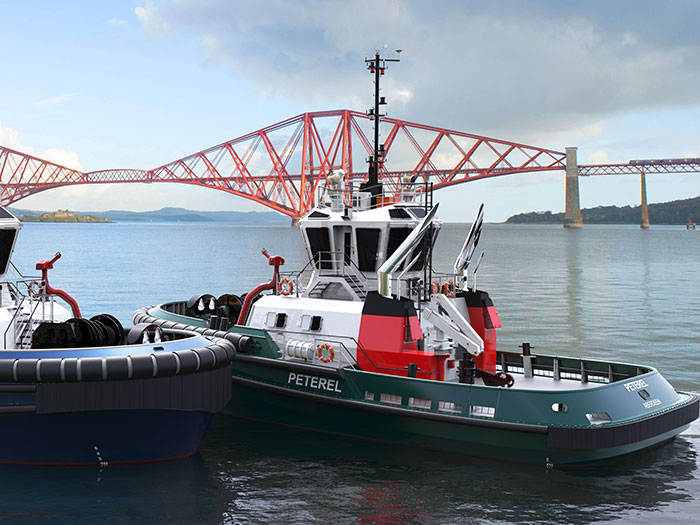 Based on the Robert Allan Limited RAmparts 2400 SX design exclusively commissioned by Sanmar, the two new “Special Bogacays” will be built to Bureau Veritas classification including full FiFi1 notation

Turkish shipbuilder Sanmar Shipyards has been steadily developing and refining its extensive ASD tug portfolio with 34 of its most popular type, the 24 meter Bogacay Class, now in operation around the world with a further seven under construction or planned.

Following Sanmar’s most recent order, project director Ali Gurun believes that, by liaising with a leading operator, the company has “come close to realizing the perfect 70 tonne bollard pull tugboat.”

The first of the two latest orders came from Ineos FPS, whose operations include the Hound Point Forties Crude Oil Export Terminal in the Firth of Forth, Scotland, where Targe Towing has managed the towing services on behalf of Ineos FPS for the past 25 years.

Delighted with the result of the collaboration, Targe itself immediately ordered an identical tug for its own Northeast Scotland port operation where this additional vessel will join Kittiwake, a highly successful Bogacay Class vessel already in service.
The changes recommended by Targe included extending the bow roll fender for push pull operations, providing a dedicated ship’s office and all officer accommodations with single cabins having en suite facilities and the provision of an oil dispersant system. Numerous other minor layout modifications have also been incorporated.

Based on the Robert Allan Limited RAmparts 2400 SX design exclusively commissioned by Sanmar, the two new “Special Bogacays” will be built to Bureau Veritas classification including full FiFi1 notation.