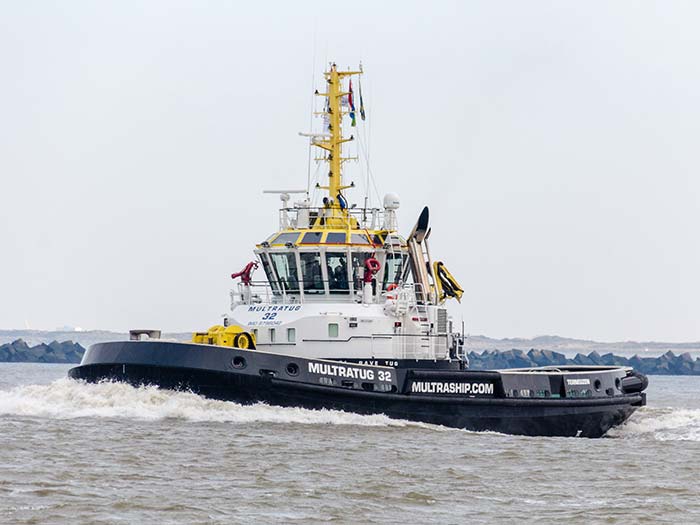 Called Multratug 32, the vessel is the first to combine two innovative technologies — the RAVE concept employing the longitudinal alignment of two VSP drives (in contrast to the more conventional transverse “tractor’ configuration” and the Carrousel Towing system. The RAVE concept was initially devised by naval architectural firm Robert Allan Limited and by Voith in Germany.

The Carrousel towing system, meanwhile, does away with fixed towing points and instead mounts the winch on a freely rotating steel ring seated around the base of the tug’s superstructure. This not only allows the tug to turn completely freely while maintaining tension on the towing line, but also permits the tug to use the lateral resistance of the hull as a powerful braking mechanism. As a result, a Carrousel Tug can brake and steer a moving tow faster and more effectively than a conventional vessel and is claimed to be impossible to capsize.

Multratug 32, was delivered by Netherlands shipyard Damen Maaskant in Stellendam and will operate under lease to Multraship.

Multratug 32 is 32 m long, has a maximum static bollard pull of 77 tonnes, and is powered by two Voith thruster units and two ABC main engines delivering 2,650 kW at 1.000 rpm. Top speed is over 14 knots.

The contract for the vessel was agreed between Novatug, an innovation arm of the Muller Maritime Group to which Multraship also belongs, and Damen’s specialist propulsion subsidiary Van der Velden Barkemeyer GmbH in November 2015. German shipyard Theodor Buschmann GmbH in Hamburg built the hull, which was then moved to Stellendam for fitting-out.

“The whole CRT concept was driven by safety considerations,” says Julian Oggel, managing director of Novatug. “In principle, capsizing is impossible when towing with the Carrousel, which facilitates the safe execution of maneuvers that would be very high-risk with traditional tugs.

“The Carrousel system consists of a base structure surrounded by a steel ring that can rotate freely through 360° in the horizontal plane. It carries a towing winch that can tilt vertically 45 degrees so that the winch can always be aligned with the towing line, providing optimal control. As a result, we can work with large seagoing vessels at much greater speeds than can be achieved by conventional tugs, and that means that the vessels themselves are easier to steer. This a major step forward for both efficiency and safety.”

Pepijn Nuijten, managing director of Multraship Towage & Salvage, says, “We are delighted with the CRT, which not only represents a major improvement in crew safety but also means that we can continue to lead the way in the provision of services for our customers. Thanks to the ingenious design of the tug, which effectively maximizes the use of the kinetic energy available in the towed vessel rather than the tug’s own engine power only, the same towing force can be achieved at much lower levels of fuel consumption than with a conventional tug.”

“The savings amount to at least 25 per cent on an average operation involving a seagoing vessel. We have been using sustainable Eco2Fuel+ diesel from De Pooter Oil since trials began, resulting in emissions of soot and particulate matter being reduced by a further 16.5 per cent, and a reduction in carbon emissions of 44.7 per cent compared with regular diesel.”

Mijndert Wiesenekker, sales director of Damen Benelux, says, “We are delighted to be handing over this remarkable new vessel to our long-standing partners at Multraship. We have been looking forward to this day for a long time and it gives us real pleasure to see Multratug 32 begin what we are sure will be a long and highly productive life.”

Damen is currently building a second, identical CRT for Novatug. Delivery is expected in May 2018 and the vessel has already been reserved for Multraship. Novatug also plans to market smaller versions of the CRT. 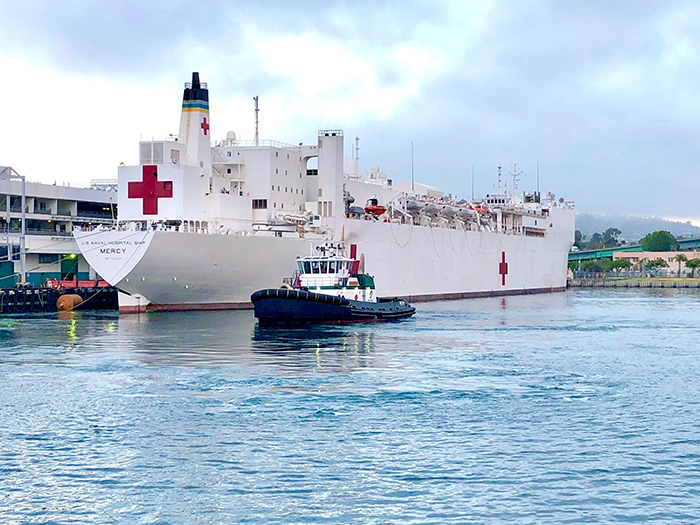